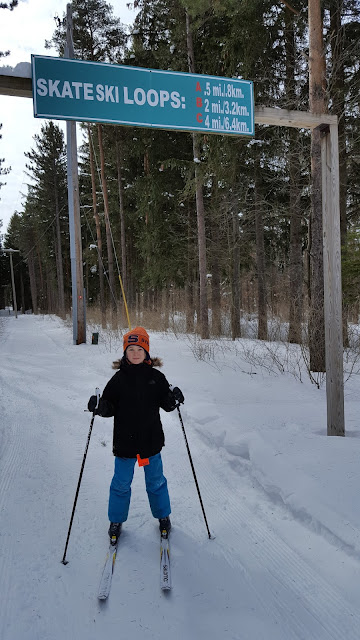 Growing up, our family cross-country skiied together often.  My parents had me on skis at a very young age.  I don't even remember the process of learning - it was just something we always did.  Many a Christmas morning featured new ski equipment under the tree.  It was not a hobby shared by many college friends, though, and not something Erwin grew up doing.  As a result, I fell out of the habit of skiing as an adult.  I have had fleeting thoughts about getting back to it over the years, but my equipment dates back to junior high and the boots were a bit snug last time I used them, many years ago.  Plus, we have had a long series of winters with paltry snow cover.  I just never seemed to make it happen.

In 2017, I participated in the 365 Mile Challenge, and tracked miles in five different activity categories: hiking, walking, biking, kayaking, and snowshoeing.  I enrolled again in 2018, and was determined to add some additional categories... like cross-country skiing!  So back in January, I got my old equipment out of the basement and headed out to Green Lakes.  It was exhilarating to be on skis again!  But hard, too - I'm not a kid anymore (and yes, those boots were too tight).  Still, I was having a great time until I experienced catastrophic equipment failure involving the boot-binding interface essentially disintegrating and the sole of the boots delaminating.  Apparently hard plastic is not meant to last for 30 years?  Sigh.  So I only got 1.5 miles that day and destroyed my gear.  I needed new boots anyway, but this lead to another lapse, because I really hate shopping.  Ugh.

Then at Frankie's art class yesterday, his friend Holly's mom said that they weren't going to stay for snacks afterwards, because they were going cross-country skiing at Highland Forest right after class.  She said the park rents skis, and has a short easy loop suitable for beginners.  Frankie had seen some cross-country skiing events televised as part of the Olympics coverage, and was very interested.  We have a ton of snow from a couple of northeasters.  Bingo!  So we got up this morning and headed out.

There are two easy loops listed at 0.5 mile each, Skate Loop A and the Northview Trail.  We set out on Skate Loop A first, simply because we got to that trailhead first. 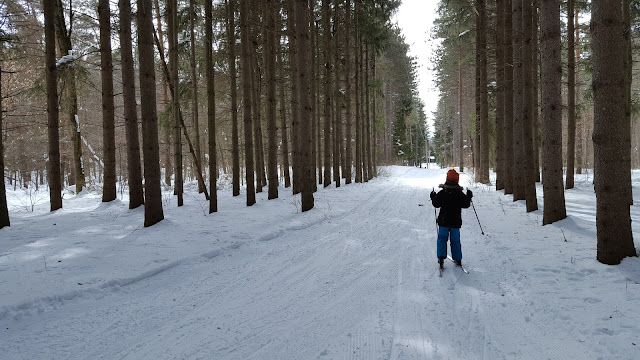 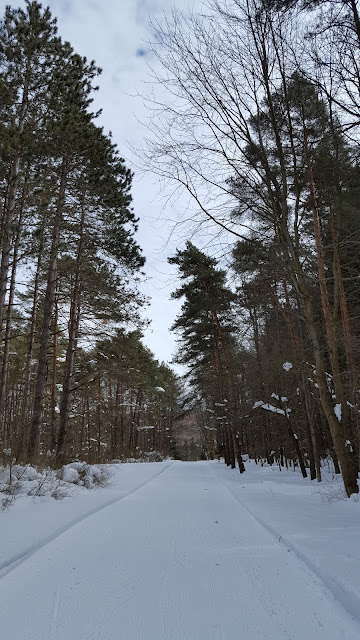 As expected, there was a lot of falling.  Frankie didn't mind, though.  I had prepared him for this, and there was a lot of laughing.  He kept saying, this is so much fun!  Just learning to get back up again after falling was the first challenge. 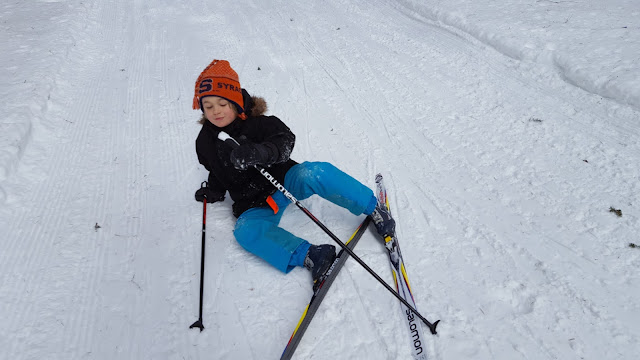 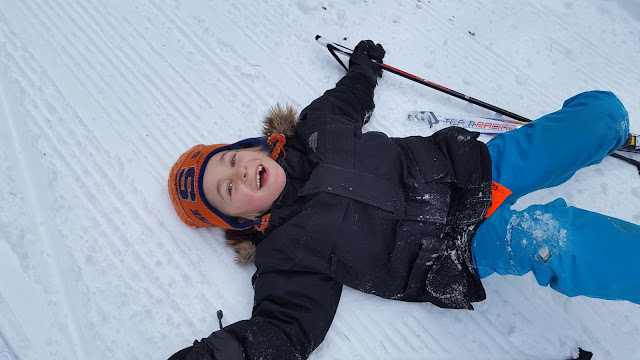 Then we came to a hill.  Whee!  Happily I still remember how to snowplow. 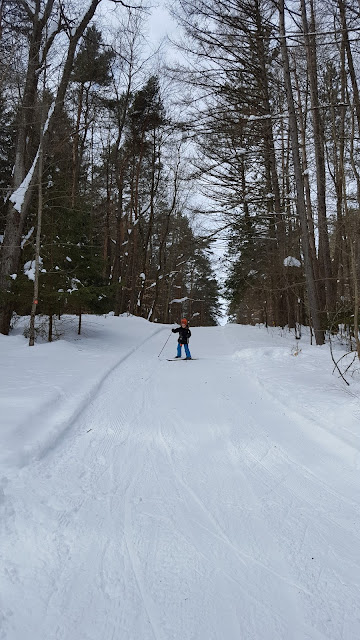 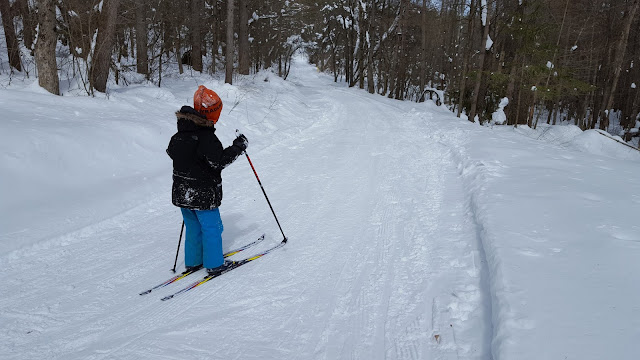 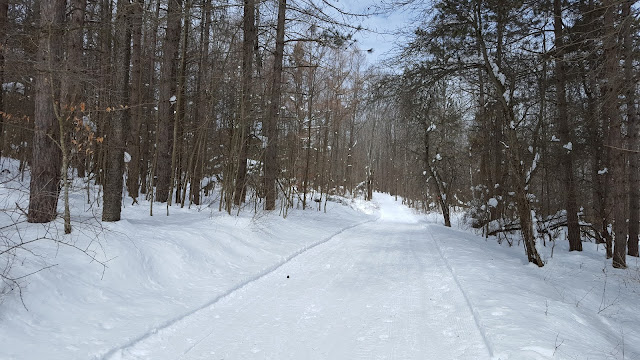 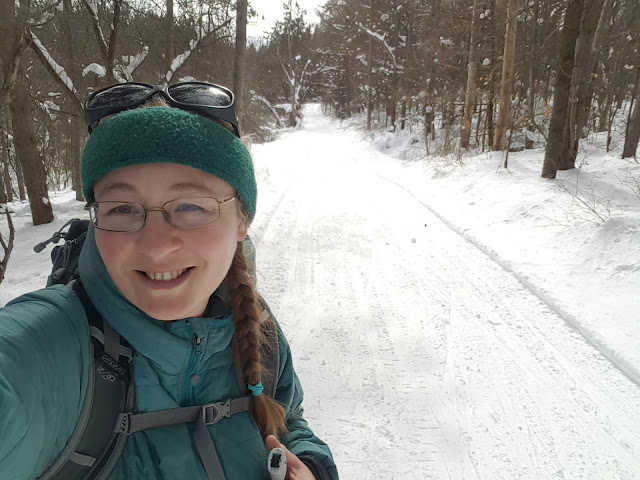 There was a little frustration when Frankie tried to leaved the groomed trail to pee on a tree.  He floundered terribly in the soft deep snow, and was virtually paralyzed.  I finally convinced him we were almost back, and if he could wait a few minutes, he could go at the lodge with much greater ease.  Then, because we had just come down a small hill, we had to climb back up a small hill.  Herring bone proved too difficult, but I finally got him up it side-stepping (not an easy task either).  We made it back to the lodge to take care of business, and ate lunch in front of the fire.

Because the last part of the loop had been tricky, Frankie wasn't sure he wanted to ski anymore.  I didn't want to push him too hard, but between the equipment rentals and the ski passes, I had paid $40.  I was really hoping to get in one more run.  We unexpectedly bumped into Holly's Dad in the lodge, and he said it was the Northview Trail that Holly liked, and that she had done it twice yesterday.  I thought we should give that trail a try, and played up to Frankie's competitive spirit.  He was still waffling ferociously and we had even gone so far as to start returning the equipment when he had a change of heart and agreed to try the Northview Trail.  Yes! 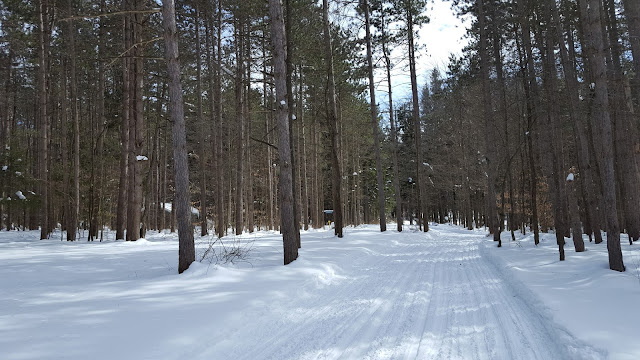 And he loved it!  In retrospect, we should have started here.  It was much easier for him, skiing in the groomed tracks, and the hills were less steep.  He was falling much less, and skiing much faster.  I stopped to adjust layers and he gleefully skiied on ahead.  It was hard to catch up! 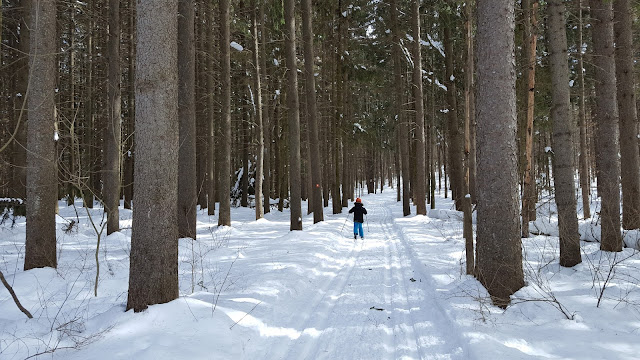 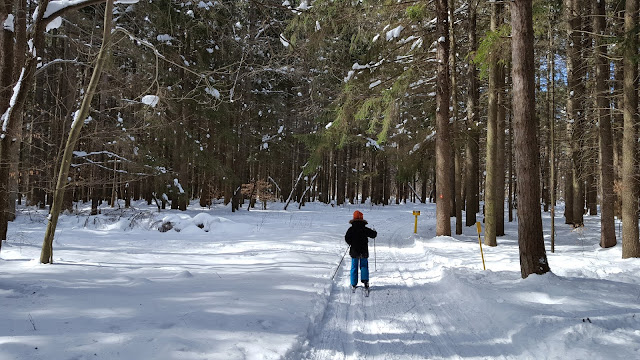 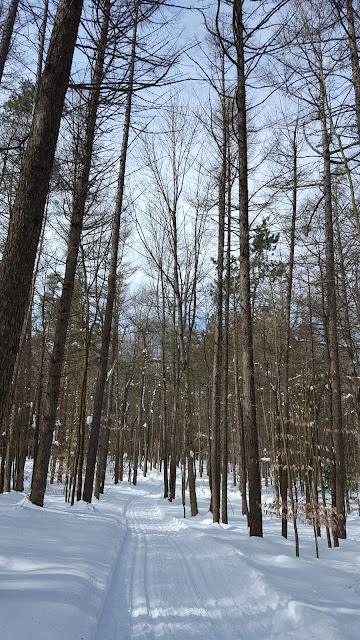 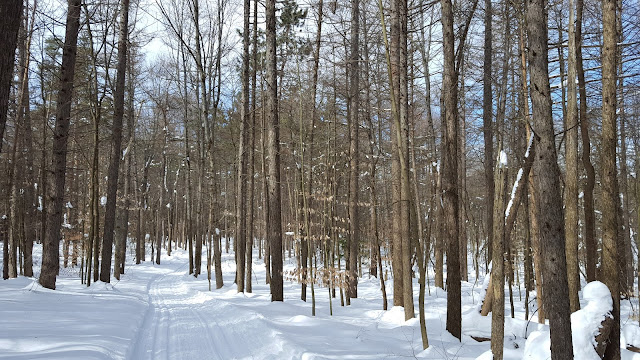 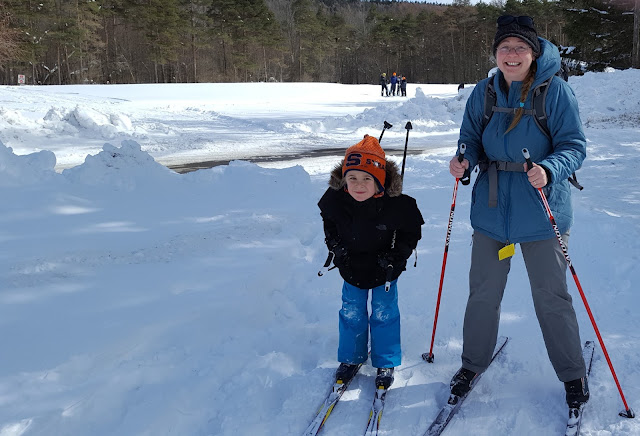 When got back to the lodge, he insisted on doing the Northview loop again!  I tried to reassure him that we didn't have to... that I was very happy to have done another loop and it would be perfectly fine to go home now.  Nope.  He was adamant: we were going again. 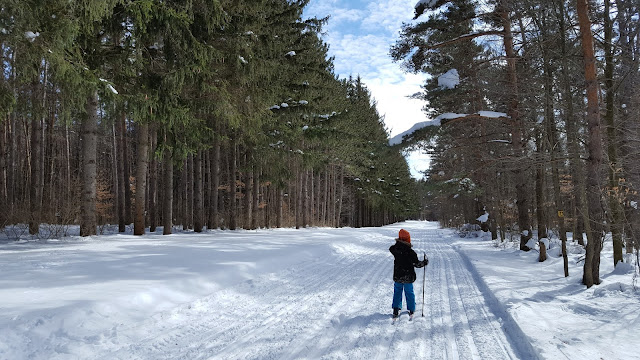 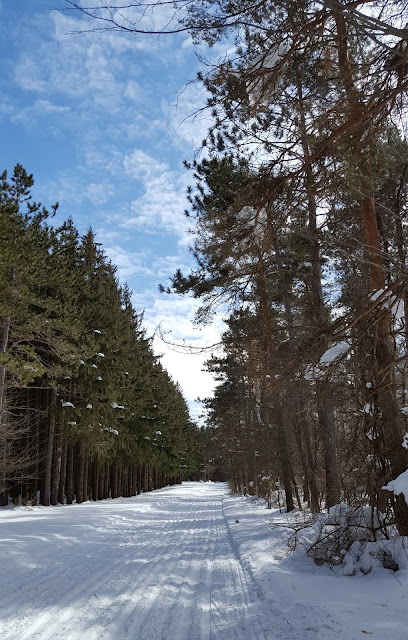 I am so glad I dragged Frankie back out after lunch so he could enjoy the confidence boost of the Northview Trail rather than end after the frustrating Skate A loop.  He ended up loving it!  He said he wished we could ski home.  Now I have a ski buddy!  Hurray!
Posted by Sara at 10:33 PM

Email ThisBlogThis!Share to TwitterShare to FacebookShare to Pinterest
Labels: CNY, County Park, with a 7-year old