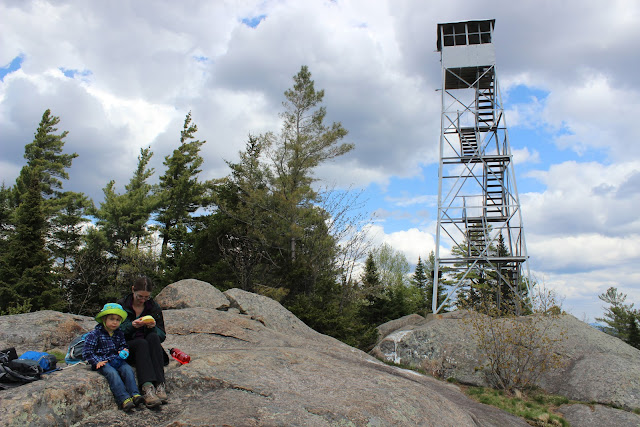 Bald Mountain is under 2 miles roundtrip, with about 500 feet elevation gain, and was a natural choice for Frankie's next Adirondack hike.  I've been up Bald before, most recently in 2010 when pregnant, so knew the trail was something Frankie could handle.  The summit ridge has beautiful views out over the Fulton chain of lakes, and an open fire tower – always fun.  Plus, the Old Forge area is much closer than the High Peaks, just a 2-hour drive each way, so within reach for a day trip.  I had this notion we could squeeze in a hike before the bugs came out.  Unfortunately, that part of the mission was not entirely successful, as the black flies were out already.  However, despite the early fliers, we had a great day in the woods.

Read more »
Posted by Sara at 11:24 PM No comments: Links to this post

Email ThisBlogThis!Share to TwitterShare to FacebookShare to Pinterest
Labels: Adirondacks, fire tower, with a 3-year old

Having already been to Clark Reservation once so far this month, and twice in April, we were looking for a change of scenery and decided to hike at Three Rivers Wildlife Management Area.  We met Erin at the parking lot along Sixty Road.  First we checked out the short wildlife viewing boardwalk, then headed westward on the two track north of what is variously called either Green Pond or the 100 Acre Swamp.  Frankie and I hadn't been on this trail in two years, back when he would start hikes on his own power, then ride in the big external frame Kelty carrier when he was tired.  It is fun taking him back to such places so he can claim them for his own.

Read more »
Posted by Sara at 11:06 PM No comments: Links to this post

Email ThisBlogThis!Share to TwitterShare to FacebookShare to Pinterest
Labels: CNY, Three Rivers, with a 3-year old
Newer Posts Older Posts Home
Subscribe to: Posts (Atom)
"The mountains are calling and I must go."
- John Muir