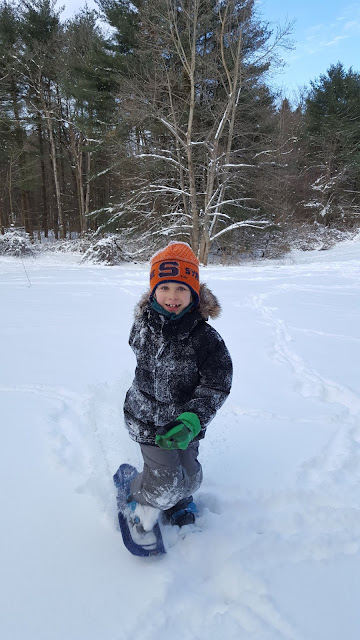 Frankie got his first pair of snowshoes as a Christmas gift when he was three years old.  Obviously he has grown a lot in five years, so it seemed like a new pair was in order.  I wanted to get him cross-country skis, too, but my December (and this January too) involved way too many extra work hours to have time for figuring out skis.  I did manage to get him the new snowshoes to put under the tree though.  Then we just had to wait for some good snow.  We wanted to meet up with Erin, so we could pass Frankie's old snowshoes onto Alden, who is 3 years old now and ready to start his own snowshoeing adventures.  I suggested Beaver Lake, because there are two seasonal trails designated for snowshoeing there.  It is fun to go out on trails that only exist in snow cover, secret passages that are all but invisible other times of year.

Read more »
Posted by Sara at 9:41 PM No comments: Links to this post

Email ThisBlogThis!Share to TwitterShare to FacebookShare to Pinterest
Labels: Beaver Lake, CNY, County Park, snowshoe, with a 3-year old, with an 8-year old
Newer Posts Older Posts Home
Subscribe to: Posts (Atom)
"The mountains are calling and I must go."
- John Muir