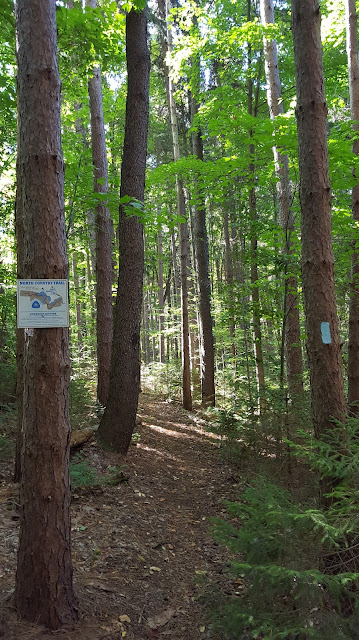 Today I headed back to the Cuyler area to hike another section of the North Country National Scenic Trail (NCT) that crosses private land with an upcoming hunting closure.  I parked at the New York State Department of Environment of Conservation (NYSDEC) lot on Route 13 that provides fishing access to the Tioughnioga River.  The trail follows Route 13 in both directions, with blue blazes painted on the telephone poles.  I walked west for 0.4 mile until the trail turns north at West Keeney Road, following a hedgerow and field edges away from the road and toward the woods.

Read more »
Posted by Sara at 10:36 PM No comments: Links to this post 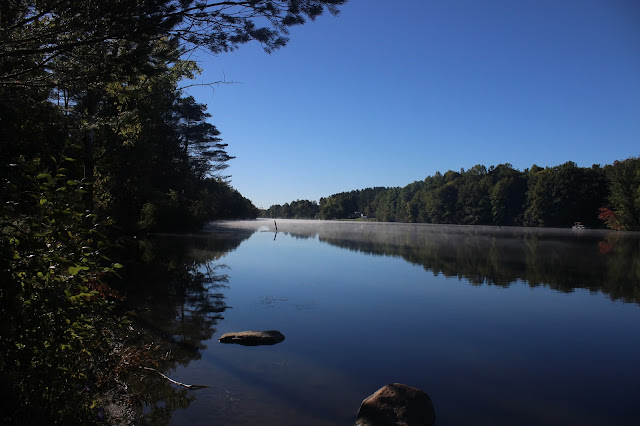 Erin and I wanted to get together for another hike, and since we hadn't been to Great Bear Farms since spring, we decided to meet there.  We took what has become our default short loop, down to the river via Alec's Trail and back via Great Bear Road.  There are so many more trails available here, but we're always trying to fit our hikes into a narrow window, constrained on the front end by how long it takes Frankie and I to get out there, and at the back end by Alden needing to get home for his nap.  And since we can't possibly skip the river, this is where we go.  It is a lovely little walk and fits our needs for now.  Someday those boys will be ready for a longer loop!

Read more »
Posted by Sara at 9:54 PM No comments: Links to this post

Email ThisBlogThis!Share to TwitterShare to FacebookShare to Pinterest
Labels: CNY, Great Bear, with a 1-year old, with a 5-year old 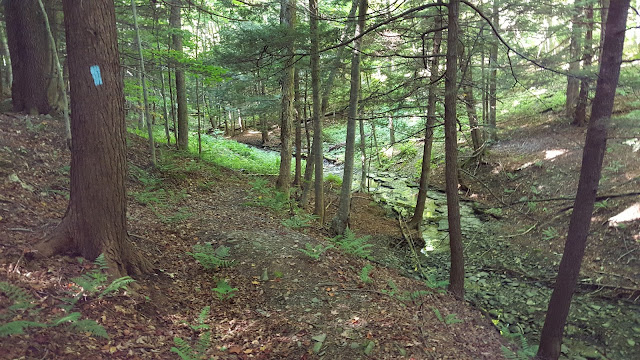 Since Erwin was joining me for the day's adventure, we took advantage of having two cars and hiked a 5.0 mile traverse, dropping one car at the parking area along Route 13 just south of Cuyler, and taking the other up to Stoney Brook Road.  This is right near where the North Country National Scenic Trail (NCT) splits off from the white-blazed Finger Lakes Trail and starts following the blue-blazed Onondaga Trail.  We included short roadwalks along Stoney Brook Road, Cuyler Hill Road, and Midlun Road, which were well worth it for the wide open views of the rolling hills.  All are low traffic rural roads, and we were passed by just one vehicle in the 0.9 mile we spent on the roads.

Read more »
Posted by Sara at 10:20 PM No comments: Links to this post 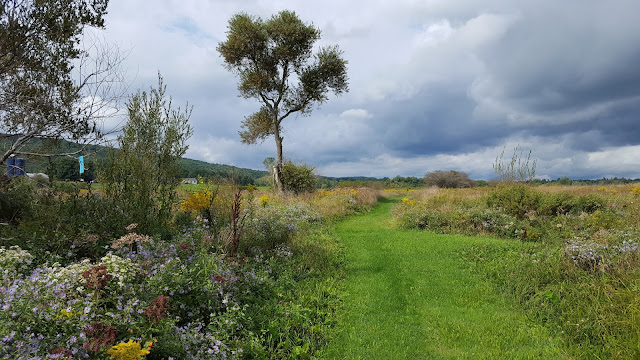 After I found out about the NCT100 Challenge back in February, I have made it a quest to explore the local off-road portions of the North Country National Scenic Trail (NCT).  When selecting and planning hikes so far, the section I did today had always seemed a low priority.  Only about 3 miles of it is off-road.  While that would be a suitable length for a hike with Frankie, there are no "attractions" along the route, so we always ended up on other NCT sections with more notable features.  For solo hikes, I prefer something a little longer, especially when I'm investing 35 minutes each way to drive to and from the trailhead.  What brought me here today was hunting.  This section of the NCT is entirely on private land, and one section of the trail is closed to hikers between October 1 and December 31.  If I want to hike this section of the trail for the NCT100, it had to be this month.  There is one other section with similar restrictions that I will be trying to visit soon, as well.

Read more »
Posted by Sara at 11:02 PM No comments: Links to this post 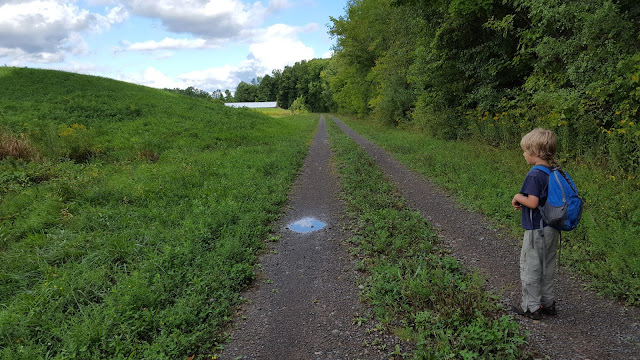 Erin and I have had a hard time getting together for hikes this summer, but we finally met up for a short walk at Three Rivers Wildlife Management Area.  Alden gets up super early and we wanted to catch him before his nap, so I rushed Frankie out the door, skipping his yogurt and giving him the pear slices to eat in the car.  We managed to get out there by 8:30 am, a rare feat for my morning slug.  It's not so much that Frankie sleeps in, not by normal standards anyway; he is almost always up by 7 am.  It's just that he likes to lollygag in the mornings.  But we made it!

Read more »
Posted by Sara at 9:50 PM No comments: Links to this post

Email ThisBlogThis!Share to TwitterShare to FacebookShare to Pinterest
Labels: CNY, Three Rivers, with a 1-year old, with a 5-year old 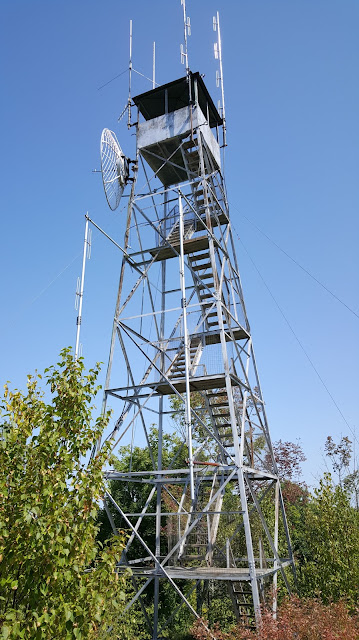 Located in the Hammond Pond Wild Forest in the eastern Adirondacks, Belfry Mountain barely qualifies as a hike -- it is more like a very short walk.  In fact, that is how I explained it to Frankie: it would be like a walk around the block, only with a fire tower halfway.  And that about sums it up... The "trail" is actually a gravel access road that services a couple communication towers just below the fire tower.  After passing the second right hand turn, the road narrows to a two track with a strip of grass in the middle.  Stay left/straight for the fire tower (i.e., keep going "up").  Roundtrip, the hike is just 0.8 mile with 120 feet elevation gain.

Read more »
Posted by Sara at 10:40 PM No comments: Links to this post

Email ThisBlogThis!Share to TwitterShare to FacebookShare to Pinterest
Labels: Adirondacks, fire tower, with a 5-year old 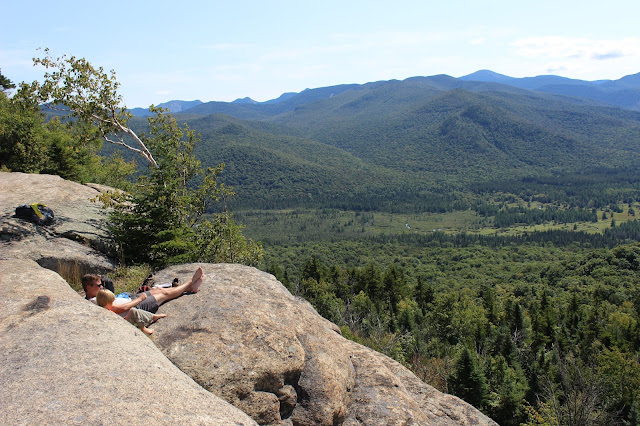 Everyone seemed game for a third day of hiking (hurray!), so we headed for another little peak I'd been keeping on deck.  When hiked from the trailhead on South Meadows Road, Mount Van Hoevenberg is 4.4 miles roundtrip with 740 feet elevation gain.  The first mile or so is pancake flat, passing through pine and spruce plantations with gorgeous sunlight streaming through the boughs.  The trail then skirts a lovely beaver pond before starting to climb.  The open water of the beaver pond offers views up to the rocky summit ledges of Mount Van Hoevenburg -- nice to see our destination before re-entering the woods.

Read more »
Posted by Sara at 10:33 PM No comments: Links to this post

Email ThisBlogThis!Share to TwitterShare to FacebookShare to Pinterest
Labels: Adirondacks, with a 5-year old 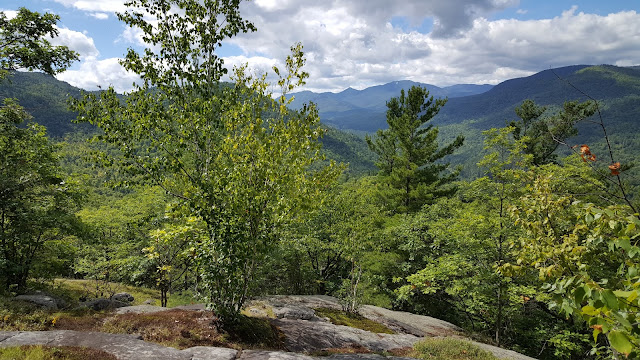 After hiking Cascade yesterday, I wasn't sure what we'd end up doing today.  Would the boys need a rest day?  Or would they be eager to hike again, like me?  We settled on doing an easier hike today.  Mount Gilligan fit the bill: it has been on my radar for a while as a good kid-friendly little mountain.  It is 2.2 miles roundtrip with 790 feet elevation gain.  The rocky summit ledges have nice views towards Rocky Peak Ridge and the Dix Range.  The gravel lot for the trailhead is on Scriver Road (not Gilligan Road) just east of Route 9.  After parking, walk the bridge across the Bouquet River and follow Scriver Road around the bend to the south.  The trail starts on the left immediately before a home; it is clearly marked with a large sign and can't be missed.

Read more »
Posted by Sara at 10:43 PM No comments: Links to this post

Email ThisBlogThis!Share to TwitterShare to FacebookShare to Pinterest
Labels: Adirondacks, with a 5-year old 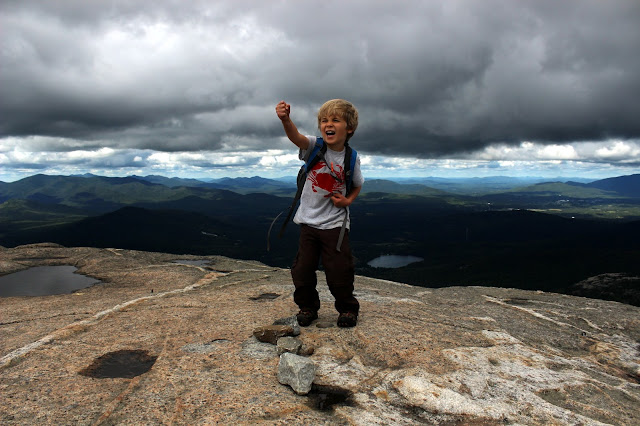 Last year at Labor Day weekend we rented a big house in Keene Valley with Jason and Susie and their girls.  The house had a huge wrap-around deck with views of Giant Mountain.  Frankie immediately began asking to hike it: "I want to climb Gigantic."  Giant as a stand-alone (without Rocky Peak Ridge) is generally accepted as one of the easier of the Adirondack High Peaks.  However, it is still about 6 miles round trip with more than 3,000 feet elevation gain.  Since Frankie was four at the time, and hadn't yet climbed any High Peaks, we deferred.  I told him I wanted him to climb Cascade Mountain first, and if he liked that, we would consider taking him up Giant.  And he did not forget... he's still talking about "Gigantic."  So this year at Labor Day weekend, we rented a little house in Keene with views of Cascade Mountain.  And Frankie climbed his first High Peak!

Read more »
Posted by Sara at 11:06 PM No comments: Links to this post

Email ThisBlogThis!Share to TwitterShare to FacebookShare to Pinterest
Labels: Adirondacks, ADK 46, with a 5-year old
Newer Posts Older Posts Home
Subscribe to: Posts (Atom)
"The mountains are calling and I must go."
- John Muir