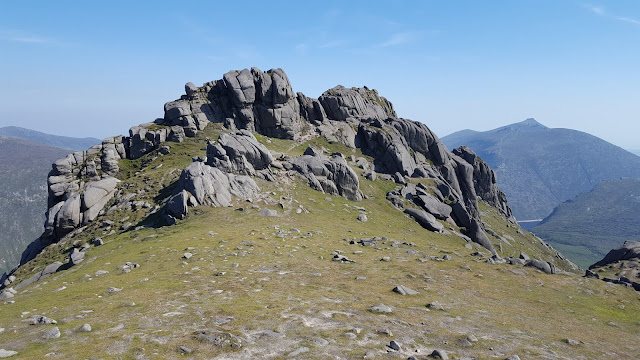 “I yearn to see County Down in the snow, one almost expects to see a march of dwarfs dashing past. How I long to break into a world where such things were true.” -- C.S. Lewis

The heat wave smothering Ireland continues, and at 86 degrees Fahrenheit, today was hot and downright muggy.  Again!  This weather is highly unusual here: most years Northern Ireland doesn't see a single day with temperatures this high, yet today is the second day in a row to break 30 degrees Celsius, and the pattern is forecast to continue.  The high humidity, combined with smoke from fires, made for hazy, almost smoggy conditions in the Mourne Mountains.  Not exactly ideal for another day of rugged hiking, but... we're here, aren't we?  Tomorrow we drive north.  We have to make hay while the sun shines. 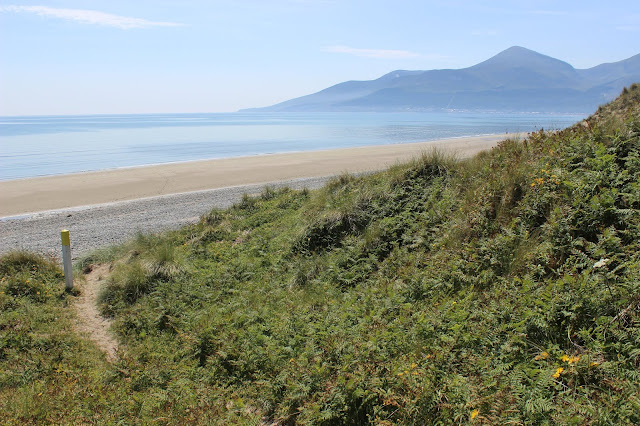 After climbing Slieve Binnian yesterday, we planned for a rest day today, in hopes of squeezing in another big hike tomorrow before heading north.  While walking in Newcastle, we'd seen some impressive looking dunes along the coast north of town.  We found out that the Murlough National Nature Reserve is owned by the National Trust and was the first Nature Reserve protected in Ireland.  Located at the edge of Dundrum Bay, the 6,000 year old dunes are apparently one of the most extensive dune heath habitats in the United Kingdom.  We decided  to hike the South End Nature Trail, a 2.5-mile loop featuring boardwalks, beach walking, footpaths through the dunes, and a narrow track through a pasture. 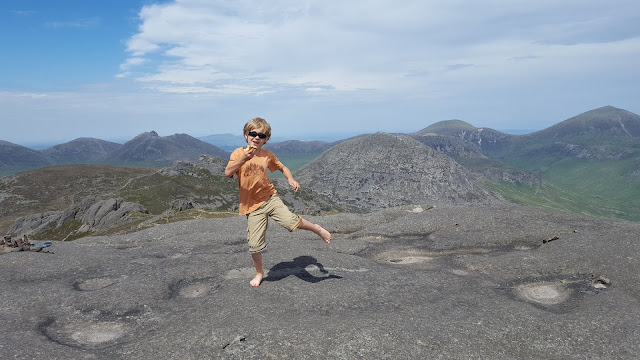 "I have seen landscapes, notably in the Mourne Mountains and southwards which under a particular light made me feel that at any moment a giant might raise his head over the next ridge." -- C.S. Lewis

The Mourne Mountains are located in County Down, which comprises the most south-easterly county in both Ulster Province and in all of Northern Ireland.  I can't recall when or in what context I first learned of the Mountains of Mourne, but I do know it was fairly recently -- within the last year, certainly -- and that I was immediately smitten.  I pored over the Mourne Mountain pages at WalkNI.com and obsessed.  I learned that C.S. Lewis spent holidays in the area in his youth, formative years, apparently, for he later attributed the real world magic of the Mournes as the inspiration for Narnia. What else could we do but get a copy of The Lion, the Witch, and the Wardrobe and take it with us on a journey to explore the Mournes? 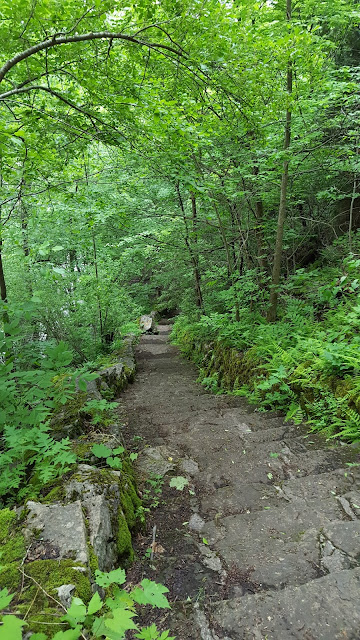 I don't post about the majority of our hikes at Clark Reservation State Park, just because we go there so often, and I have posted about it so many other times.  I have never bothered documenting solo hikes here, and have mostly transitioned to posting only hikes that include family members beyond Frankie and I, just for the fun of looking back at the pictures later.  Even on this front I have been slacking: Frankie and I hiked here with Mary in October 2017 and with Erin and Alden in September 2017, and I didn't document either hike.  In fact, it's been almost a year since I last posted a Clark hike.

Email ThisBlogThis!Share to TwitterShare to FacebookShare to Pinterest
Labels: Clark Reservation, CNY, State Park, with a 3-year old, with a 7-year old
Newer Posts Older Posts Home
Subscribe to: Posts (Atom)
"The mountains are calling and I must go."
- John Muir