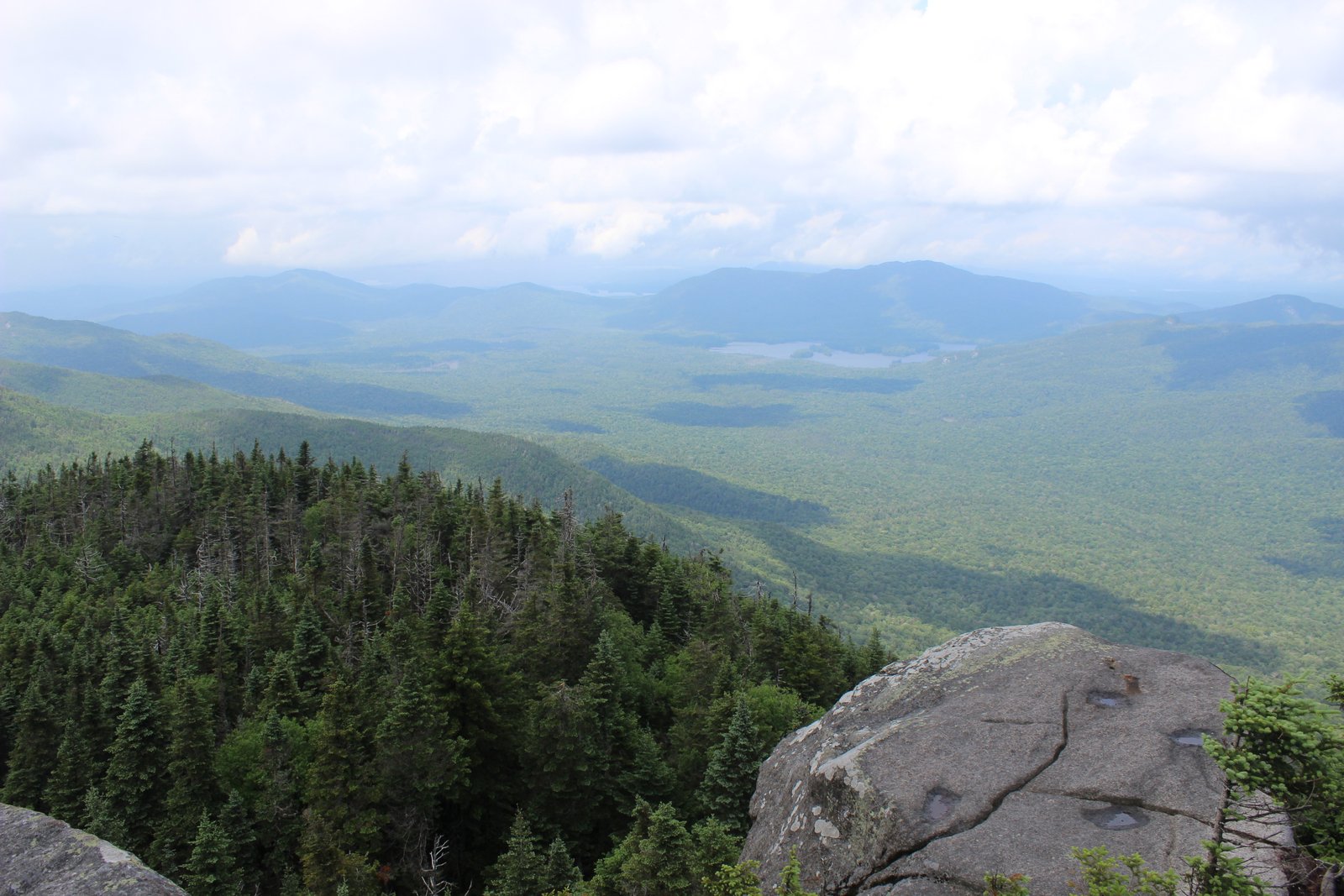 Due to our overwhelming desire to get back in the mountains, Erin and I decided to repeat the drive-hike-drive scenario we had success with last month.  It makes for an extremely long and exhausting day, but is easier to swing logistically.  We selected Seymour for this hike because neither of us had been to the Corey's Road trailhead before, and it's nice to mix things up, plus it has the advantage of being a slightly shorter drive.  There was a 40% chance of rain, and the NYSDEC had just lifted the muddy trail restrictions the day before.  We went in knowing the Sewards always have a bit of a reputation for mud, and thinking we had some idea of what to expect.

The giant puddle we had to stand in to sign in at the trail register was definitely a hint of what was to come... Because mud there was!  Mud, mud everywhere.  Also lots of plain old water, and deep water, at that.  Since the hike is over 14 miles and we prefer dry feet as a general rule, our initial progress was quite slow as we tried to find the shallowest places to step while remaining on trail (going around mud and open water just causes erosion, trail widening, and worse mud in the future).  We actually met one party on their way back to the trailhead, retreating in defeat from the mud.  The mud wasn't the worst of the conditions though.  Nor was the heat, nor the humidity, which was so rampant there was mist rising off the moss in the woods and my glasses were fogged for the duration of the hike.

Our biggest struggle was with the bugs.  They were horrid: omnipresent and vicious, mosquitoes and black flies both.  We applied bug dope and it helped, albeit minimally.  However, even after repeated applications, the bugs were too persistent to stop much, which had several adverse effects.  First of all, I wasn't able to take many pictures.  OK, not the world's biggest tragedy, I know.  But the lack of breaks for snacking, hydrating, and just plain resting definitely took their toll.  I was bonking hard on the final ascent, fighting waves of nausea and exhaustion.  We kept thinking: we're almost there, we're almost there, there will be a breeze on the summit to knock the bugs down and we'll eat then.  Unfortunately, when we reached the forested summit, the bugs did not let up.  We took a few obligatory but tormented photos by the sign, and explored a nearby ledge.  Gah!  No relief.  We retreated to the larger ledge with dramatic views toward Seward and Ampersand Lake, holding out hope, but again no luck.  More tortured photos, but we couldn't even sit down.

So back down we headed.  We snacked a bit on the descent, but Seymour's herd path is pretty rough and demands full attention, not to mention hands.  We made it back down the herd path safely, and finally stopped for a break at Blueberry Lean-to, where we were joined by Rockbiter and Tom from the Forums, who were returning via the Ward Brook herd path from a hike of the other three Sewards.  We ended up hiking out with them, and their demanding pace (by our slow standards; they had obviously slowed down significantly to accommodate us) and Rockbiter's lively conversation made those last few miles fly by.  It also helped that since our feet were already wet, we made no effort to avoid the wet patches, and just sloshed through the mud and water, sometime at depths exceeding the tops of our gaiters.

But we resolved not to return to the Sewards again under such buggy conditions.  Maybe we'll save them for a fall hike after a frost destroys the vermin?  Our slow pace suggests a day with longer daylight might be better, though.  We'll see... maybe in time the horror will fade.