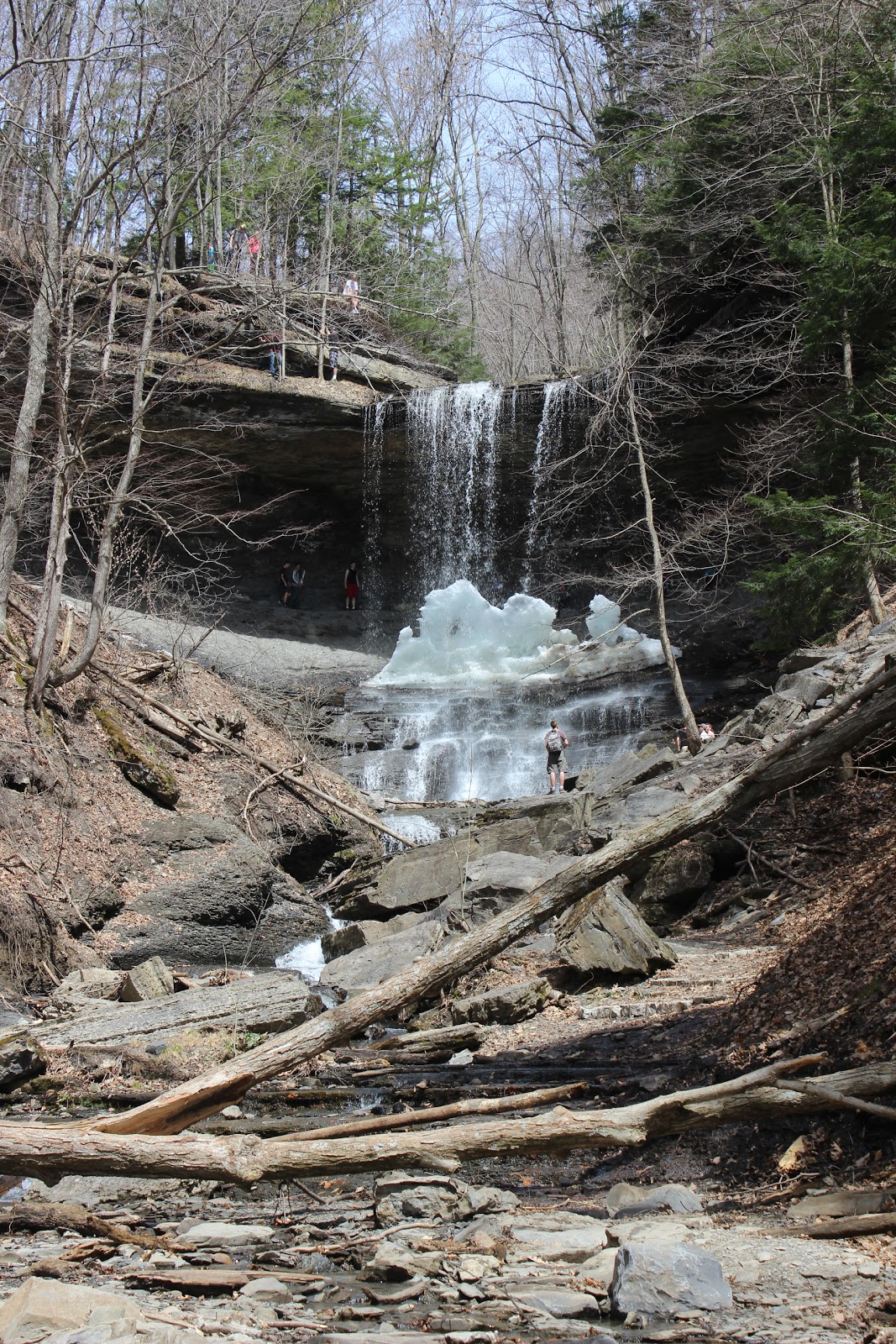 Sunday Frankie and I had a lazy morning around the house before heading out for a hike.  I couldn't bear not being in the woods; it was simply too beautiful outside to stay home.  Tinker Falls and the hang glider launch pad on Jones Hill have long been a favorite spring hike of mine, one I haven't indulged in since Frankie was born.  In 2013, we took a family hike to the base of Tinker Falls, out and back, no further.  In 2014, it was a combo hike with Erin: a Tinker loop behind the falls, then the boardwalk loop at Labrador Hollow.  This year I decided Frankie was finally ready: he could handle the hike to Tinker Falls, and then continue on to the top of Jones Hill.

We had an unpleasant incident early on when Frankie was throwing rocks in the stream below the falls.  The trail was busy on this gorgeous day, so we crossed at the ford then went downstream a bit before he started throwing rocks, and I specifically reminded him to be careful to throw away from the trail, away from people.  I'd taken him far enough so we were out of his range; he wouldn't have actually hit anyone on the trail even if he'd thrown in the wrong direction, but I wanted to reinforce the need for caution when throwing rocks.  Unfortunately, shortly after he starting frantically flinging away, he turned to look at me, and a rock came flying my way.  I reflexively protected the camera, deflecting the rock with my hand, but it bounced off my hand and struck my face.

It was never his intention to hit me.  He was just being careless, and his face immediately registered shock and dismay.  And while it certainly smarted, there was no lasting harm: no blood, no bruises. However, given the discussion we'd had just two minutes before, I was furious.  I told him there would be no more throwing today, whatsoever.  Throwing things in water is a passion of Frankie's, and he did not react well to this news, so I made him stand facing a tree trunk to calm down and think about what had happened.  When I called him over to hug/talk, he still was still bitter about the punishment, so back to the tree again.  By the second talk, he was adequately apologetic and resigned to no more throwing today, so we purposefully put the incident behind us and moved on, determined to salvage the day.  Was I too harsh?  Too easy on him?  What is the appropriate response to hitting a person with a rock?  It was clearly unintentional, but also not really an accident (due to the lack of caution).  This is not a situation I've encountered before and I don't know how well I handled it.

Anyway, we climbed up the steep rock stairs to the amphitheater behind the falling water.  We met a woman climbing back down who warned us that she'd had to turn back before reaching the top, because the stairs are steep and wet, and there is no railing.  She seemed to be worried about me bringing Frankie up there, but I just smiled and wished her well.  No need to mention that he'd already scrambled up the slick stairs last year when he was three.  Kids have a low center of gravity and aren't prone to longing for railings.  Going behind the falls is really neat, and a little poking around in the crumbling shale will generally turn up fossils, but we didn't linger today, quickly passing behind the falls and clambering back up more slick rock steps on the other side.  The falls area was infested with teenage boys, twenty or thirty of them, many shirtless and whooping in the cold spray.  From a distance I thought frat boys, but they were younger, and had adult chaperones.  I am glad for their sakes they were out in the woods, but was also glad to put some distance between our parties.

At the next T-intersection, we turned right and started the climb up Jones Hill, into new territory for Frankie.  The trail is fairly wide with a relatively smooth surface, but the grade gets pretty steep for a while.  We puttered along slowly, admiring the first few spring wildflowers and butterflies, playing in the hollow base of a tree, and taking a break for a snack/rest.  We were passed by a number of parties of adults heading up (including the same horde of teenagers), and one family with a little boy who was maybe six or seven heading down.  They warned that they had to turn back without getting to the top because it was "really far."  They were friendly enough, but I wish people wouldn't constantly underestimate kids.  Their little boy seemed to be energetic and in good spirits, despite a constant barrage of admonitions.  No running! Don't step in the mud!  I feel certain he could have made it to the top.  And I don't want Frankie to internalize this constant message that he can't do things that he's perfectly capable of. 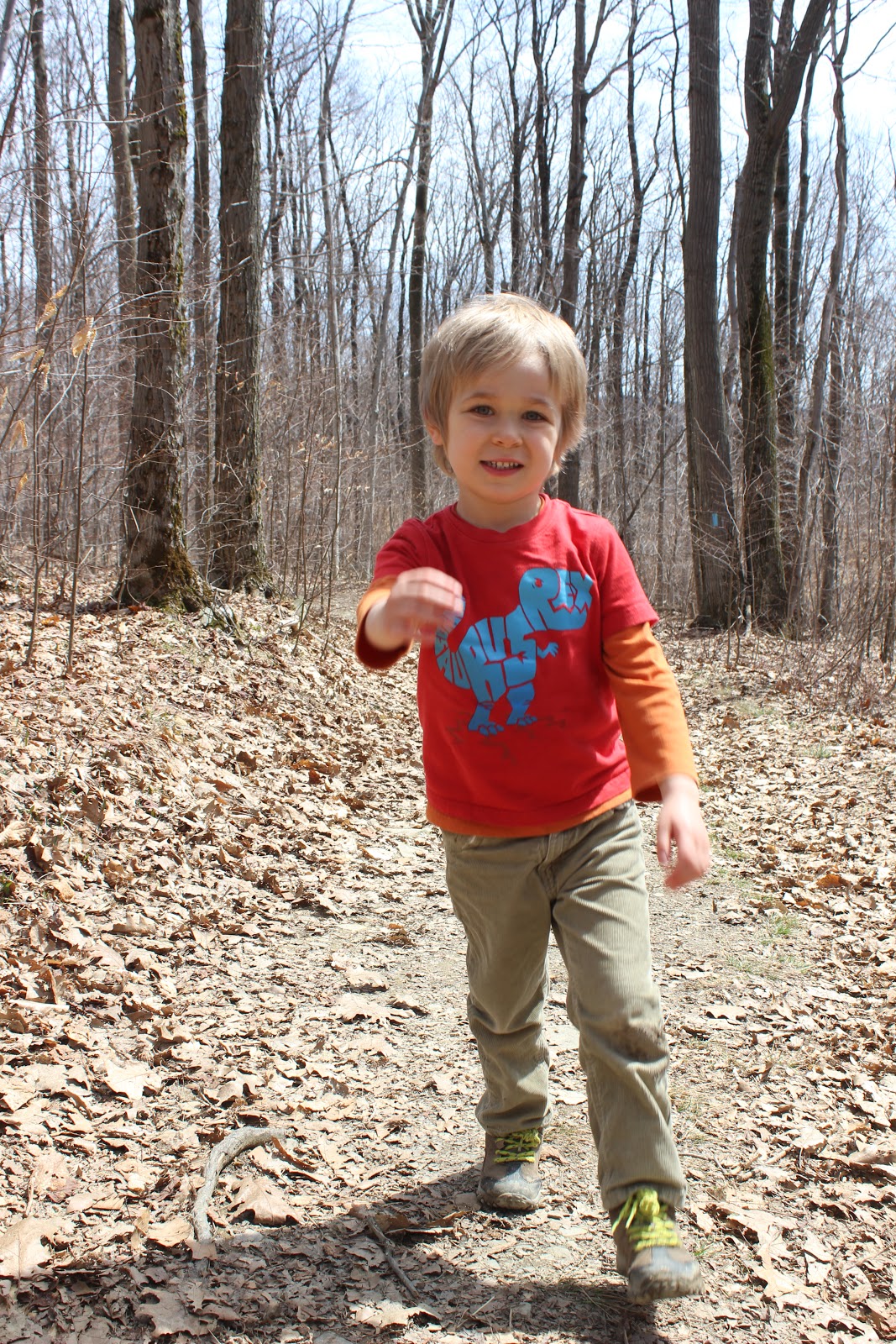 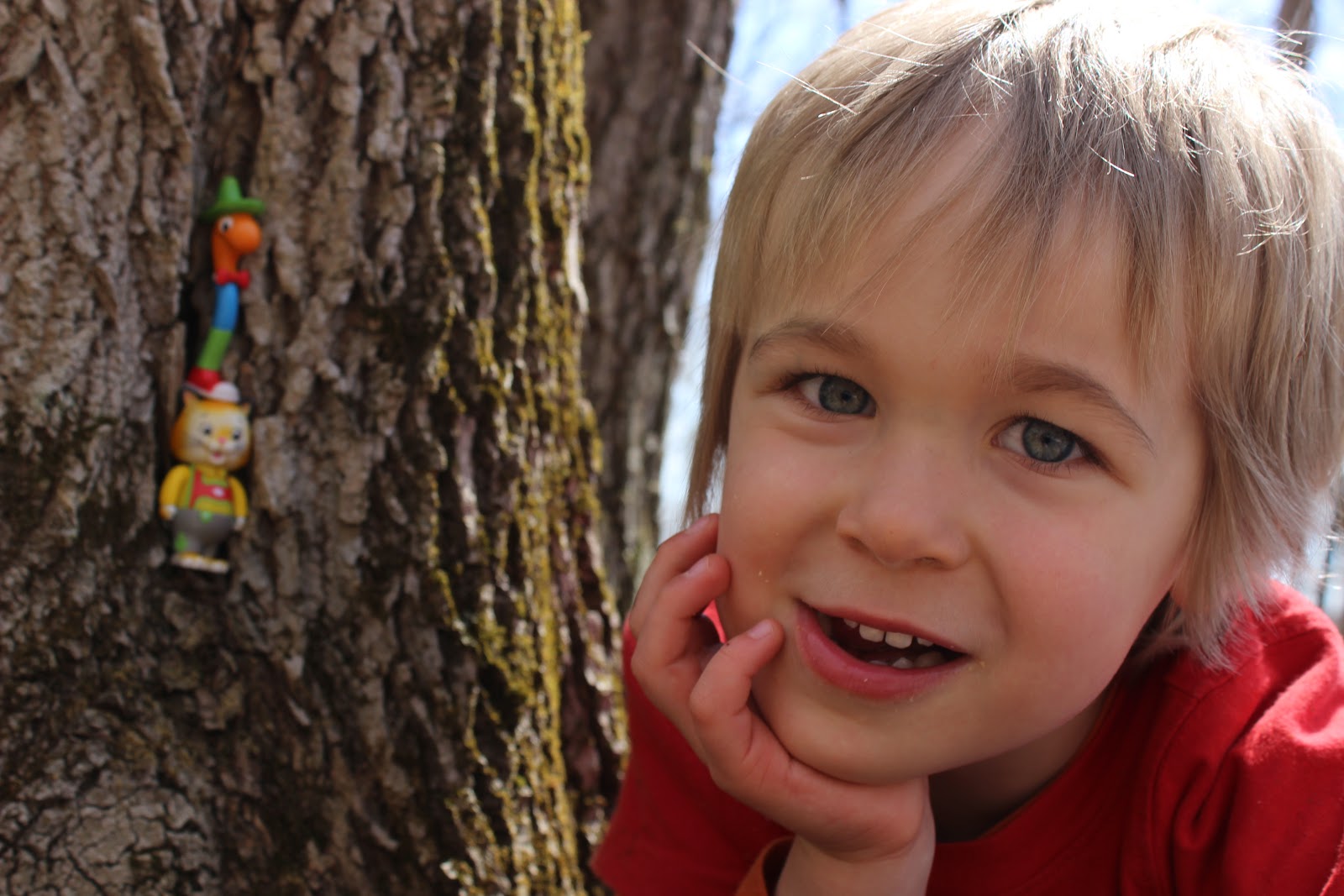 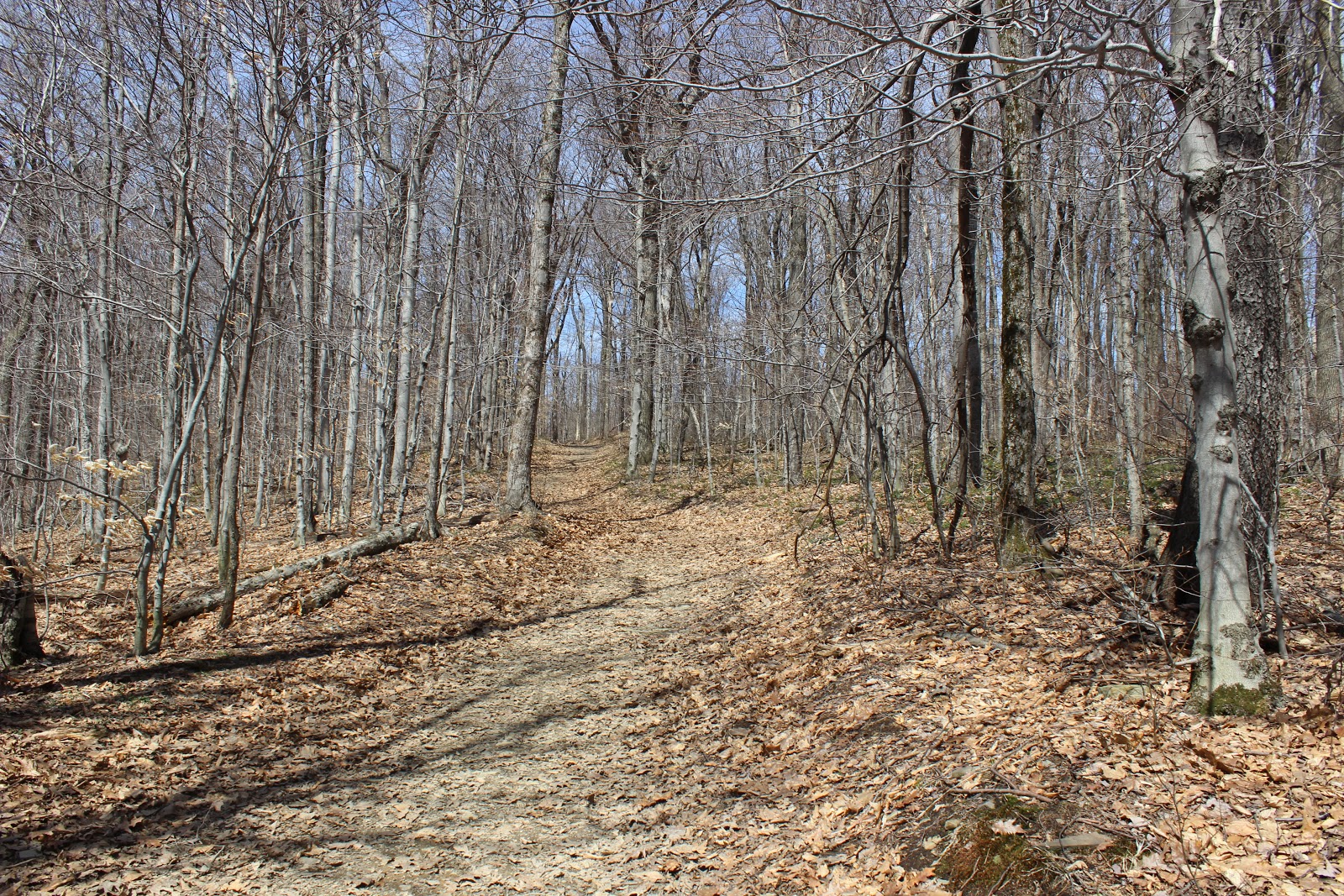 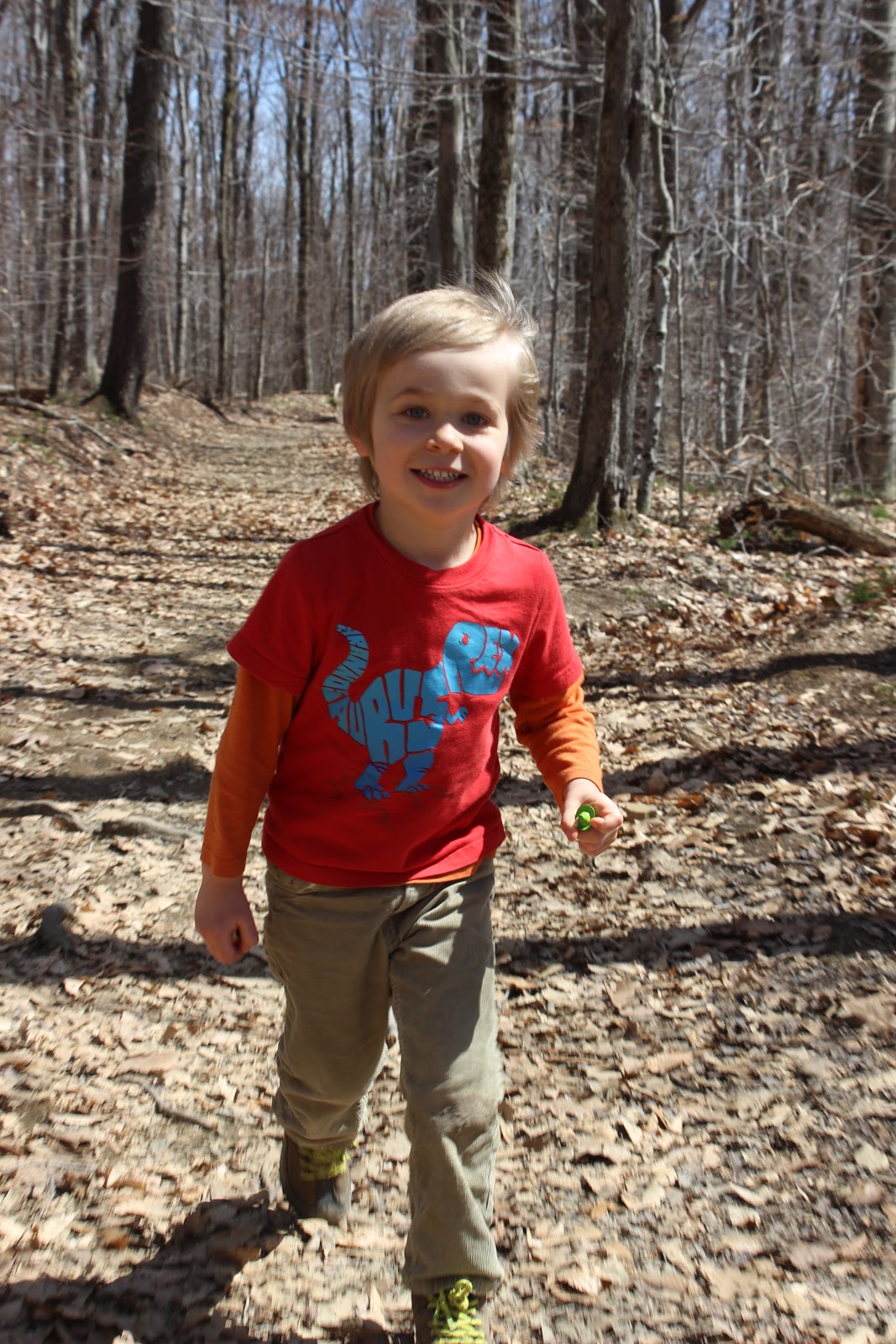 The trail levels off near the top, and we got to the hang glider launch site sooner than I'd anticipated (my expectations for pace are non-existent).  Frankie immediately requested the bubbles I'd thrown in the pack at the last minute, and I happily handed them over.  I've never brought bubbles on a hike before, but thought a little extra incentive might help encourage him up the slopes.  When I told him I was bringing them, I explained they weren't for blowing at the waterfall or on the trail, but only when we got to the nice view at the top, and he completely respected that, never mentioning them at all until we had arrived.  He was happy as a clam sitting up there blowing bubbles in the sun.  I was so proud of my little guy!

We hung out up there enjoying ourselves for a good long time.  There was a constant parade of other hikers arriving and then moving on again.  The clearing up top is fairly small, so I couldn't help but overhear some of the conversations.  One family arrived with two boys, the younger perhaps 18 months in a carrier on his Dad's back, and the older maybe five or six.  The older boy was miserable, poor guy, just whining nonstop.  Then when they were packing up for the hike out, the Mom took the carrier, telling the Dad he could carry the 50 pounder this time, implying that she'd had to carry the older boy at least part way up.  I couldn't help but feel a little sorry for this little boy.  It's our job as parents to make sure our kids have fun out here!  Maybe he was just having an off day, but I couldn't help feeling like they were rushing him too much.  Kids travel at their own pace.  They need to go slow and take breaks and have snacks and be silly.  Maybe if I bring bubbles along again, I'll pack a spare bottle.  Maybe that would have brought some cheer to his day. 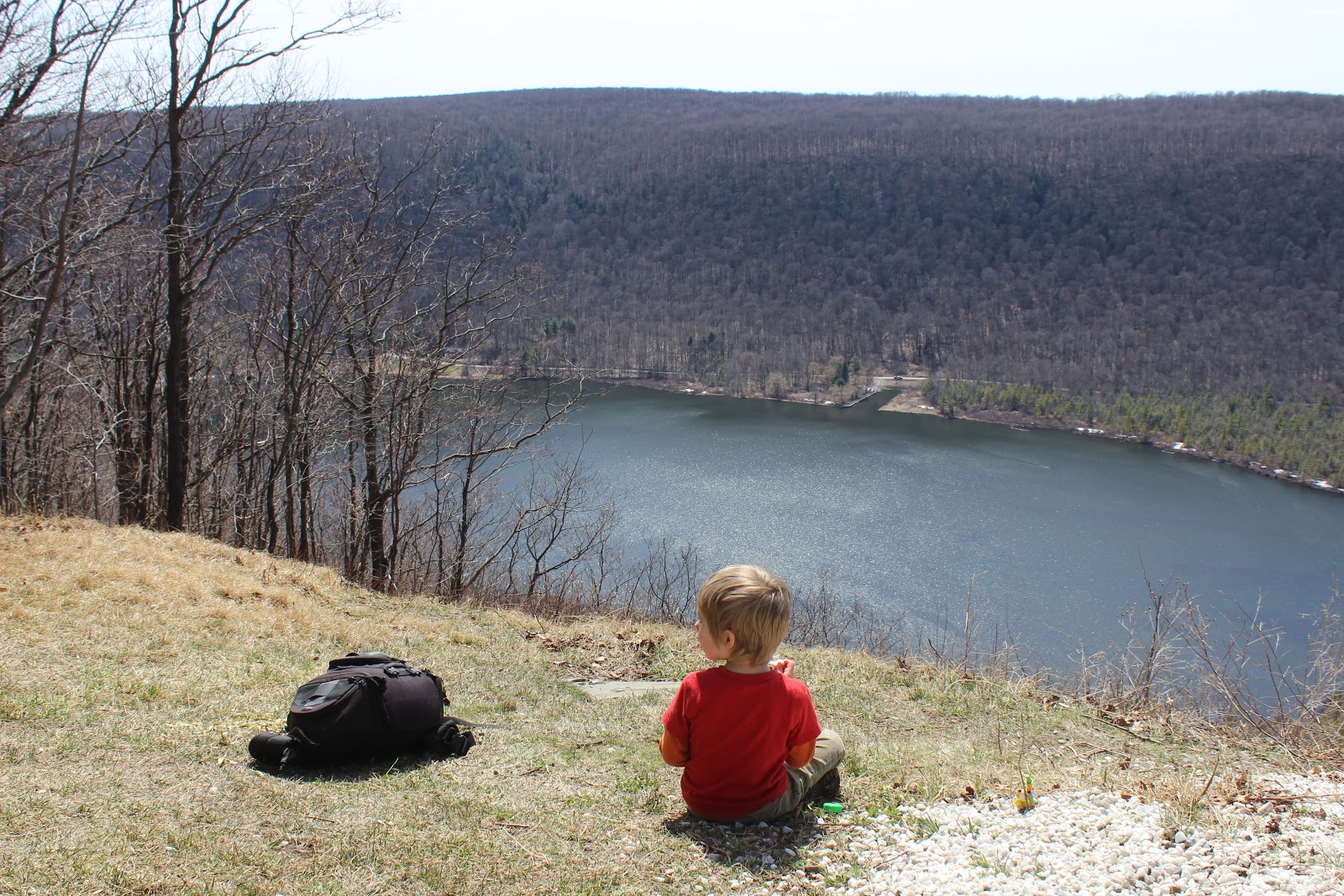 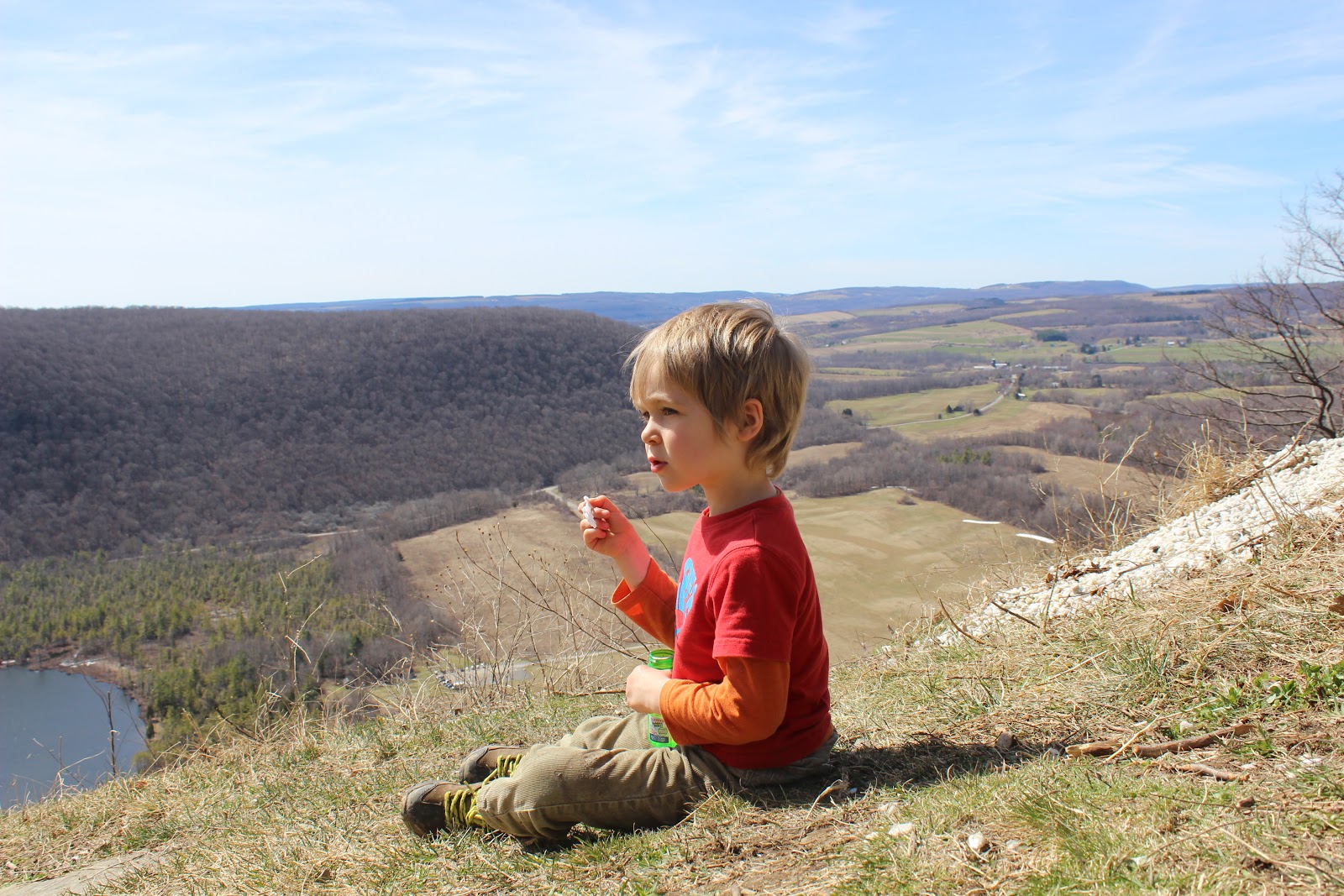 We finally started back down around 3:30 pm.  Of course the downhill part of the hike went a lot quicker.  Frankie took at fall at one point, because yes, I was letting him run, but we just sat in the trail and hugged until he felt better.  He did a lot of chattering about the pretend signs he was seeing, and I just soaked it all in, so happy to be there.  I thought Frankie would be exhausted and crash out in the car on the way home, but he stayed alert and engaged all the home, even announcing that he wanted to go for a bike ride when we got home.  Little guy refused to even go in the house, so I got out his bike and off we went.  I let him lead, and it was a shortish ride, up to the traffic light and back through the playground, 0.67 mile total, but pretty impressive after the hike (which was about 2.5 miles round trip with about 650 feet elevation gain).  It was just a fabulous day all around. 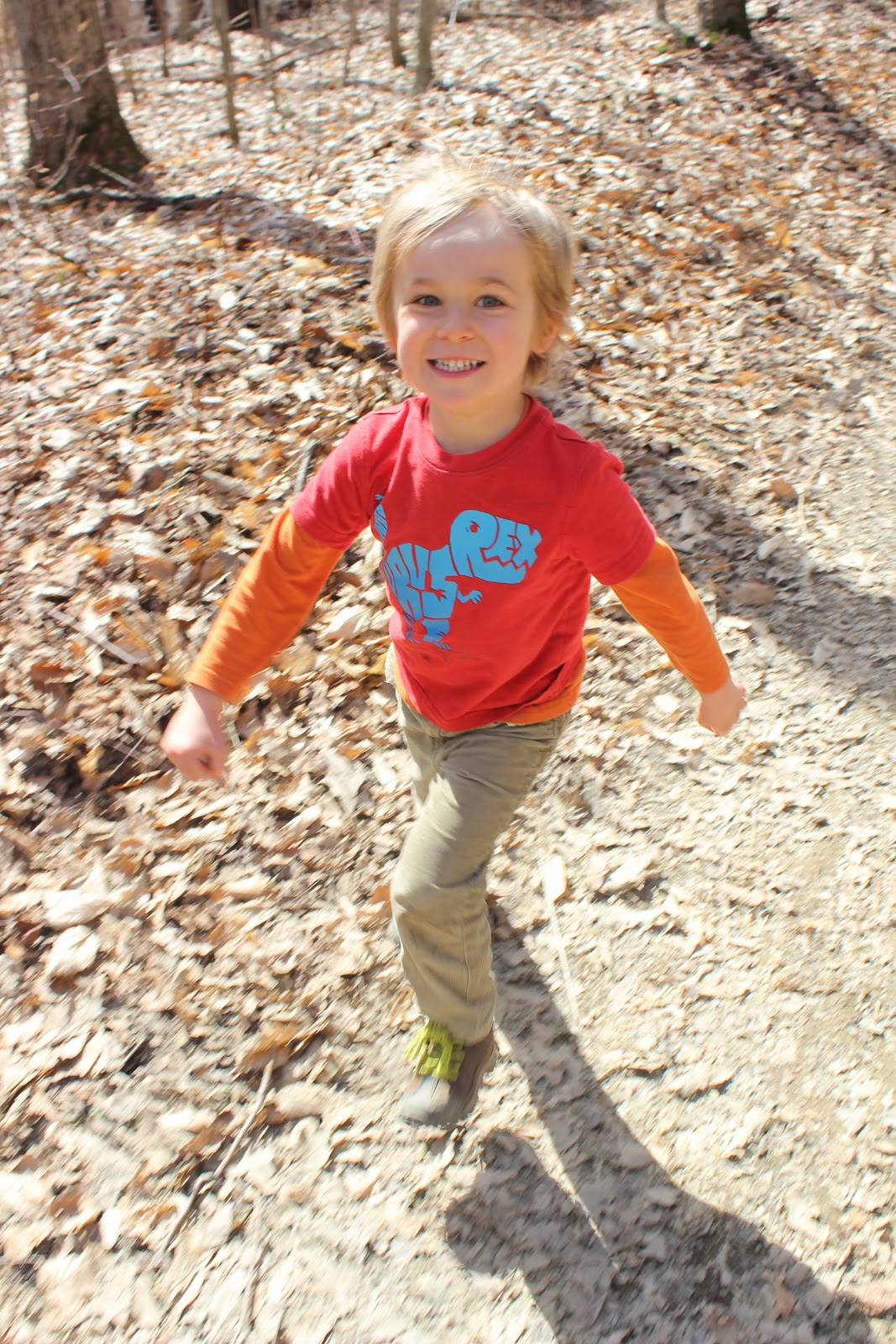 Email ThisBlogThis!Share to TwitterShare to FacebookShare to Pinterest
Labels: CNY, Labrador Hollow, with a 4-year old