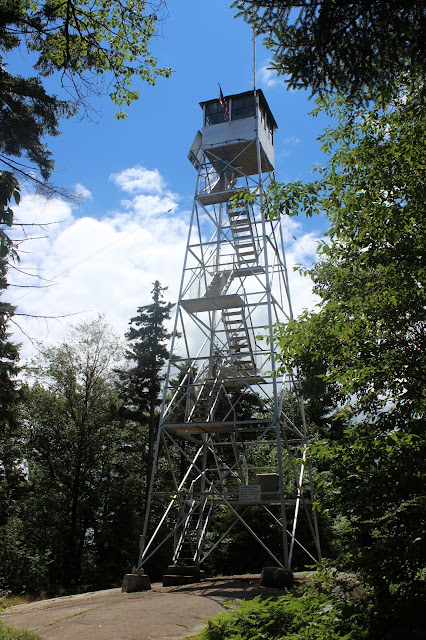 Frankie and I had so much fun with our day trip up to Black Bear Mountain last weekend that we decided to go on another adventure today.  We hadn't planned ahead for a big outing today, hadn't set the alarm or prepped snacks, and Frankie is slow on mornings when nothing is scheduled.  He was having one of his long leisurely breakfasts, engrossed in his Ranger Rick and Highlights magazines when I planted the idea, and he was into it -- and he didn't have to rush because I had to get ready.  Stillwater Mountain it is a short easy hike, making it manageable despite the long drive and our sluggish start, but it also has a fire tower to make it more exciting.  It is on private land with a fall hunting closure, and is located on a long dirt road that I'd be nervous about traversing in winter and spring.  These factors combined to make it the perfect choice for a last-minute summer hike.

The parking lot is tiny, with room for only one non-accessible vehicle, but there were cars parked on the roadside with ample room for us to pull up at the head of the short line.  The designated handicap parking is a bit confusing, because there is a staircase leading from the parking lot to the start of the trail (which then leads up a mountain, a small one to be sure, but with the requisite roots and mud and uneven terrain).  Perhaps the parking area is also used by ATV drivers who use the dirt road as a trail?  There was mercifully no sign of ATV use on the hiking trail.  Rather mysterious...

By the time we changed into our hiking boots and headed up the trail, it was after 1 pm.  We signed in at the register and immediately passed several groups on their way out.  The trail is soft underfoot, and climbs gently but steadily, gaining almost 500 feet in just over a mile.  After passing several more parties headed down, we reached the fire tower in just 40 minutes, significantly faster than the hour Frankie had predicted.  We could see there was someone in tower, and upon reaching the cab, discovered it was a volunteer summit steward, very nice fellow.  He immediately issued us each a sticker, an unexpected but welcome treat, and showed up how to open the windows.  This fire tower was just restored and re-opened in 2016, and is in fantastic shape.  It's just beautiful!

A young couple joined us in the cab briefly, and the summit spoke to them as well, issuing more stickers.  We snacked and shuffled around to share the views, and then the other hikers moved on.  We could see that it was raining to the west on the Tug Hill, obscuring the Maple Ridge wind turbines we'd driven through on the way here.  The steward said they'd been plainly visible earlier.  We still had blue skies in the other direction and could pick out Whiteface, Marcy, and Algonquin.  It was too hazy to identify any of the other distant High Peaks, but those three are pretty distinct.  Watching the rain move toward us, the summit steward decided to head down.  We lingered a bit longer, enjoying having the cab to ourselves, then packed up my bag, closed the windows, and headed down ourselves.  We poked around the base of the tower a bit, finding two benchmarks, then started the hike out.  We spent a total of 40 minutes on the summit.

The descent was quick and easy.  It rained a bit on the way down, but the foliage kept us pretty dry.  By the time we stopped to put away my camera and get out the raincoats, the rain was nearly done, although of course the trees continued to drip away after the sun came back out.  I never actually put my raincoat on.  The hike out took just 30 minutes.  After changing back into sandals, we were ready for the drive home.  We stopped at the Stewart's in Lowville for gas and milkshakes, and were still home in plenty of time for dinner with Erwin.  There is something slightly disconcerting about a hike where less time is spent hiking than driving, but it was still a great day adventuring with my boy -- so much better than rattling around the house. 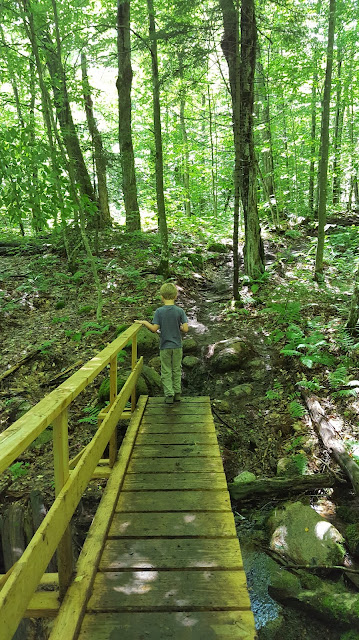 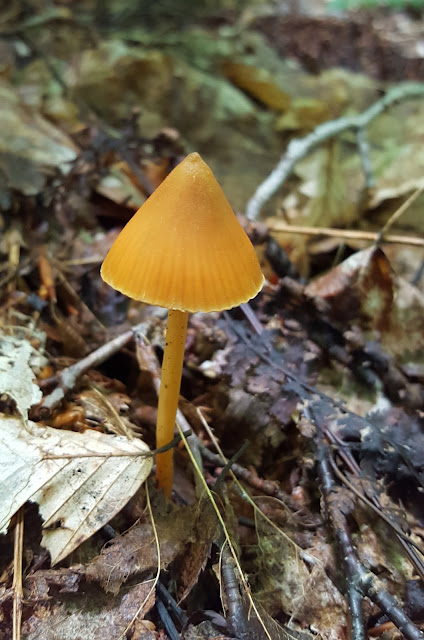 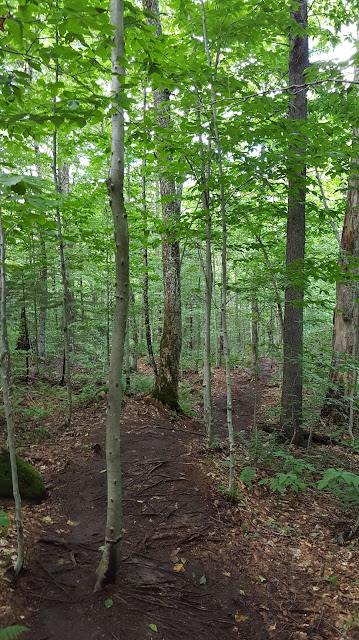 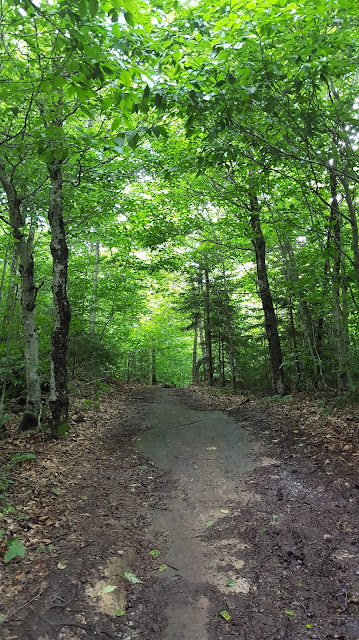 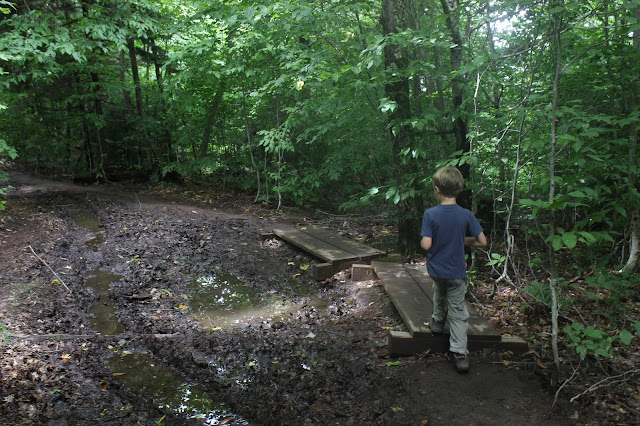 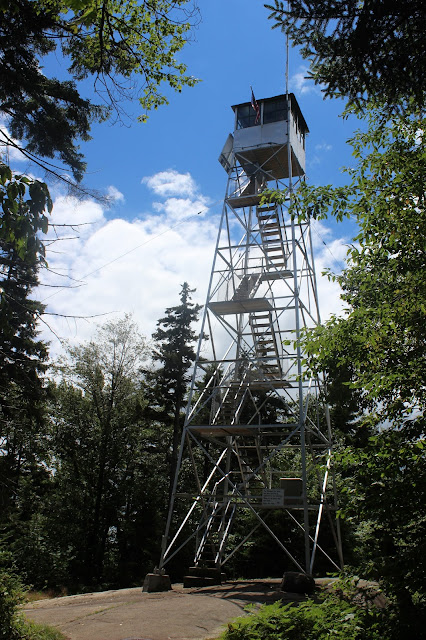 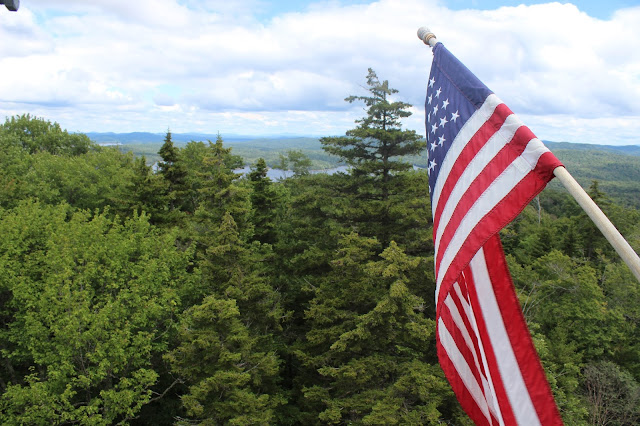 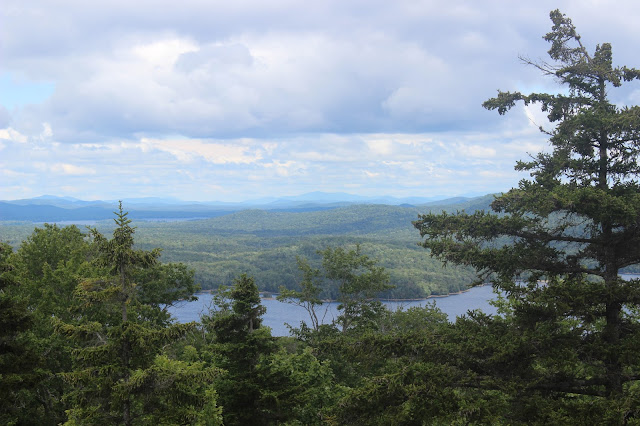 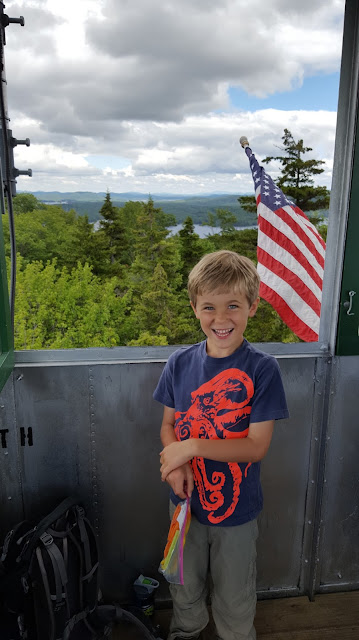 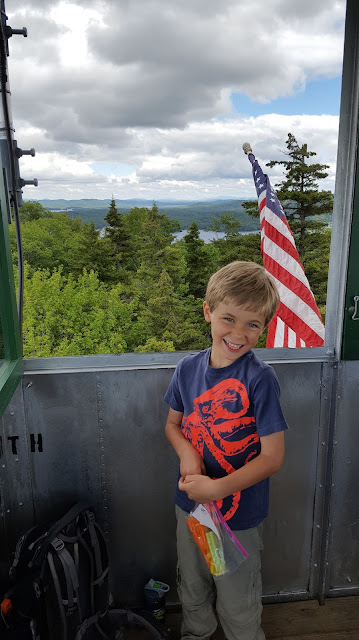 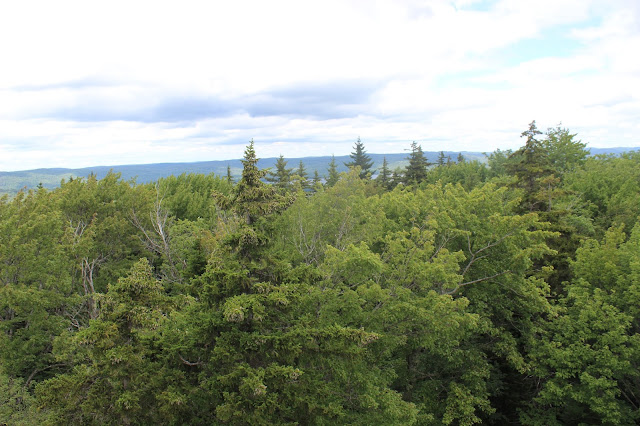 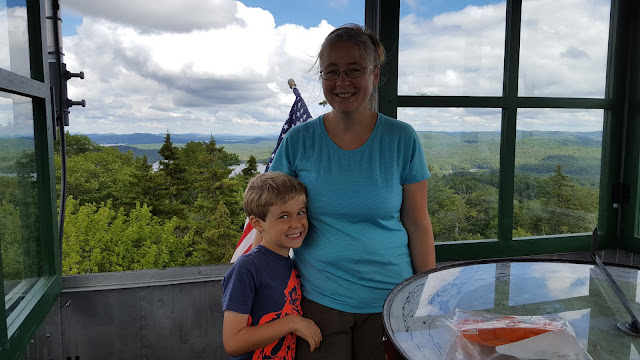 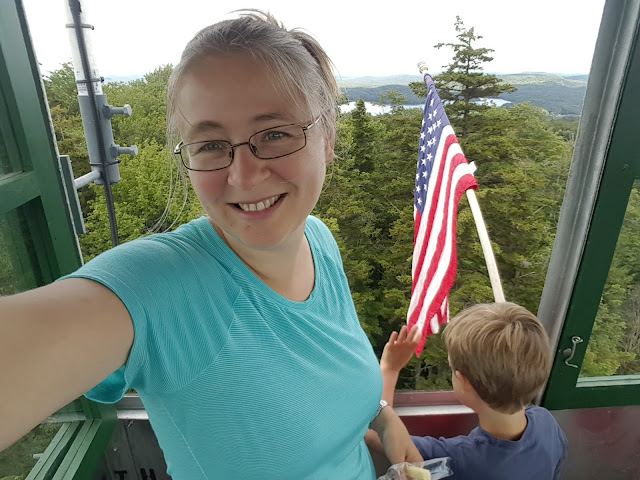 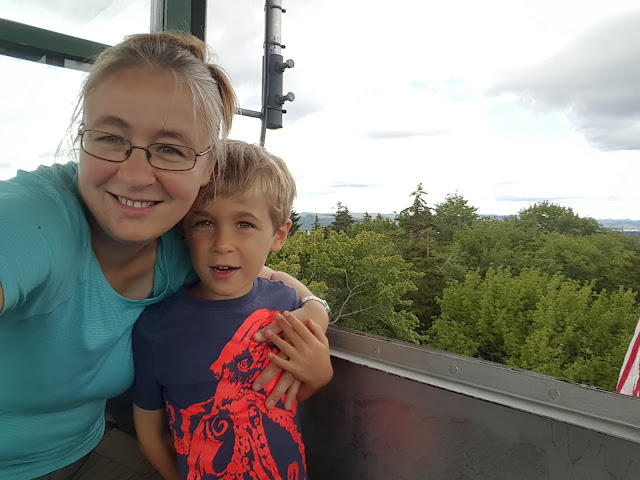 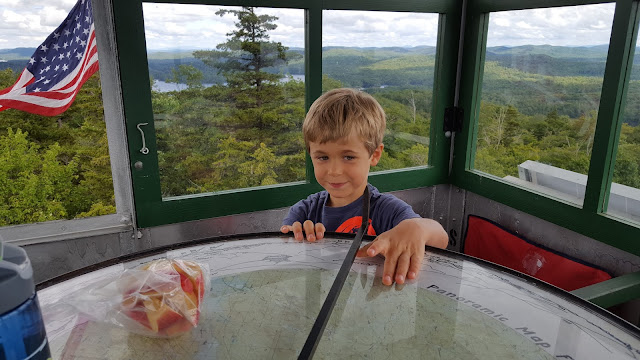 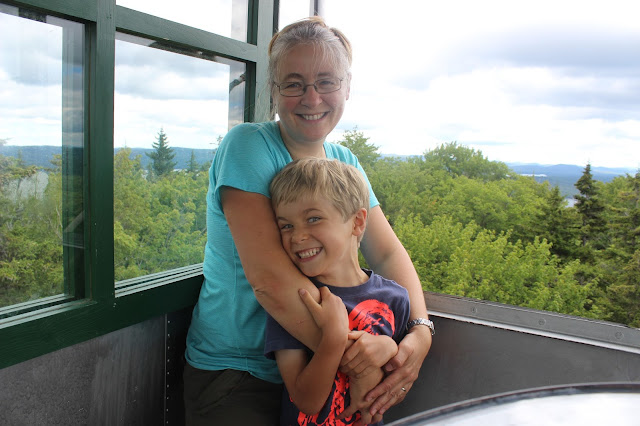 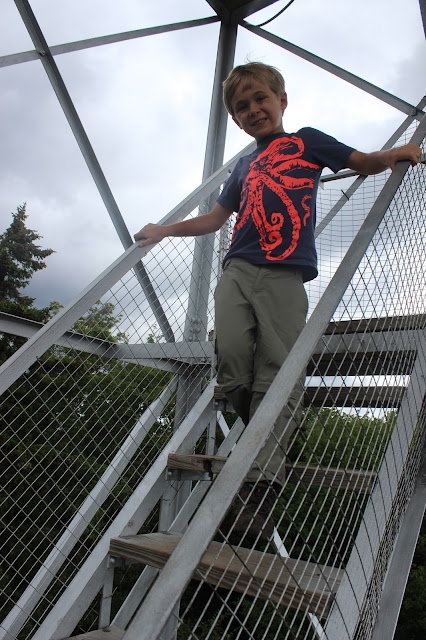 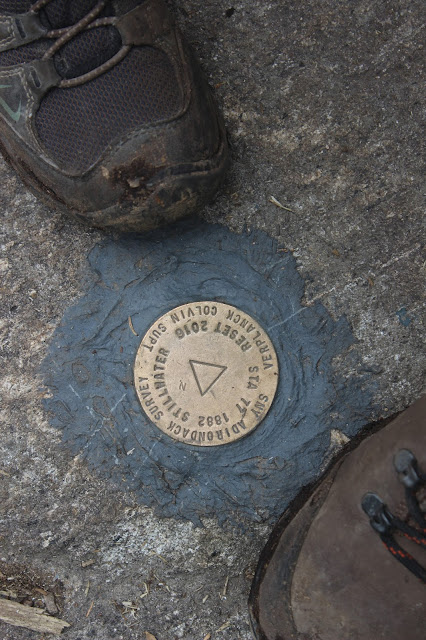 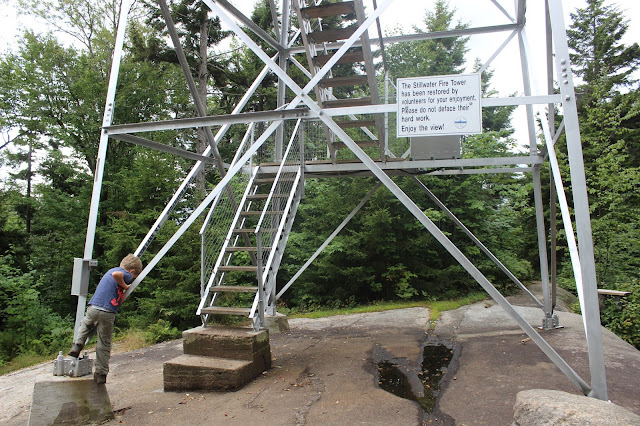 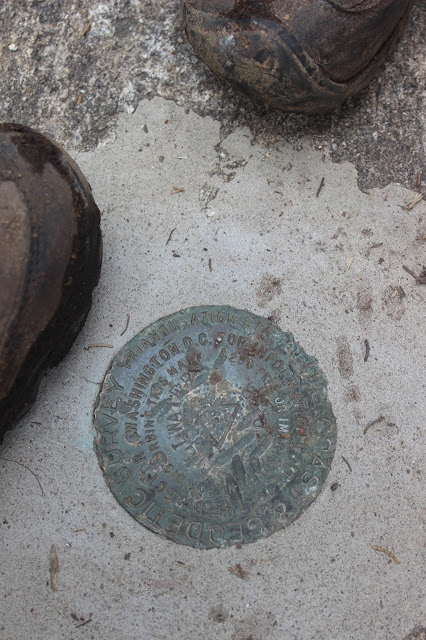 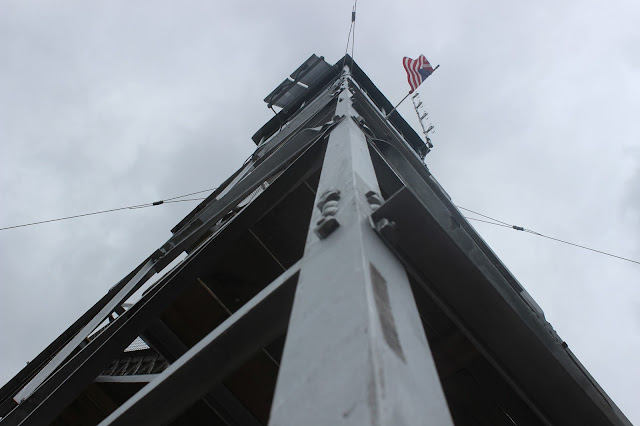 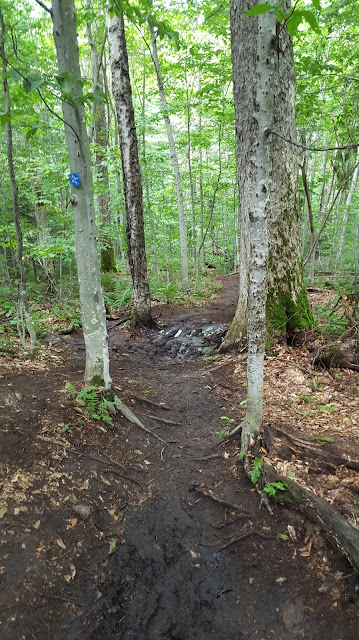 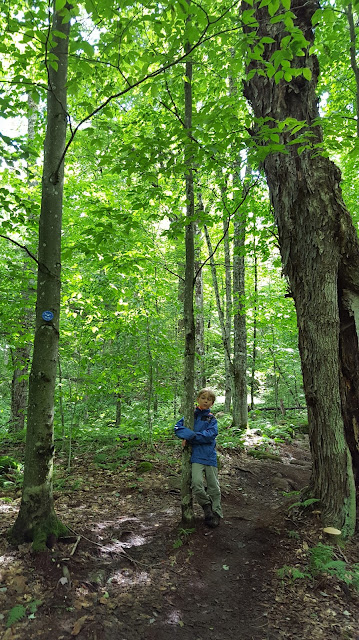 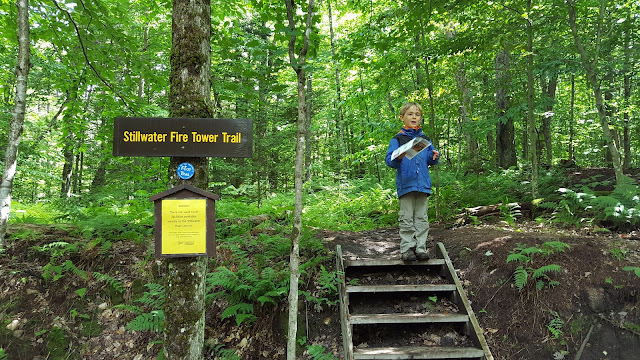 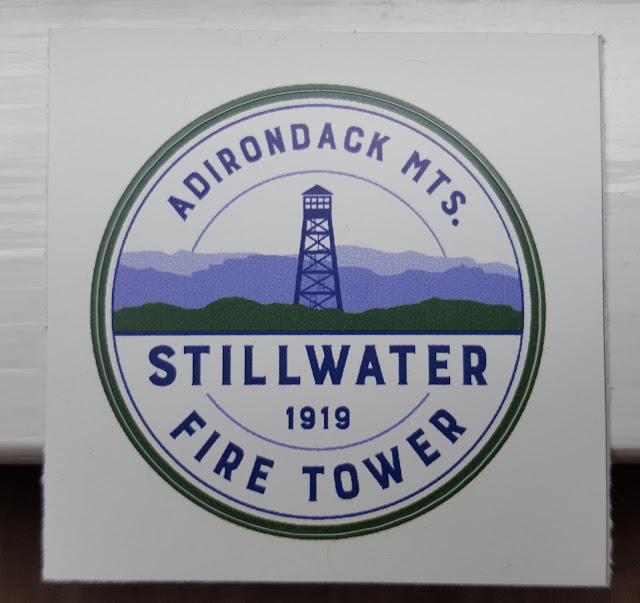 Email ThisBlogThis!Share to TwitterShare to FacebookShare to Pinterest
Labels: Adirondacks, fire tower, with a 6-year old