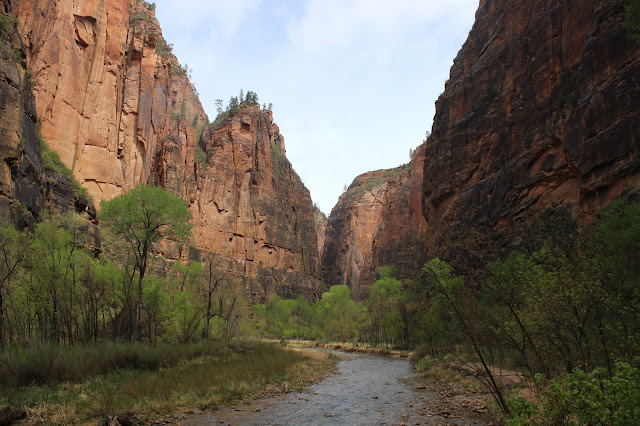 Since I had picked the Observation Point hike, and Erwin really wanted to see the valley, I deferred to him on the selection of this trail.  According to the trail map/brochure, the Riverside Walk is 2.2 miles roundtrip, an out-an-back leading to the entrance to the famous Narrows.  Of course, what Erwin really wanted was to hike the Narrows, but on this cold and rainy morning, it wasn't a real option for us.  We knew spring isn't the ideal season for this hike, especially given that we travel with our boy: water levels are highest this time of year and cold, too.  Frankie has no body fat and would quickly get chilled, even if the air temperatures were 40 degrees warmer.  So we settled for just seeing the portal.  This time.

The trail is very easy and super crowded, the mall at Christmas level of crowds.  When we came to the first set of stone steps leading down to the river, we immediately turned off, at first just to step out of the parade of flesh, but when we got down there, there was a wide, well-defined path, and we followed it along the water.  There was hardly anyone down there, and it was ever so much nicer with a little space to enjoy ourselves.  We passed several other built staircases and ramps down to this level, so didn't feel like we were walking where we shouldn't be.  We decided to stay down by the water as far as it seemed legit. 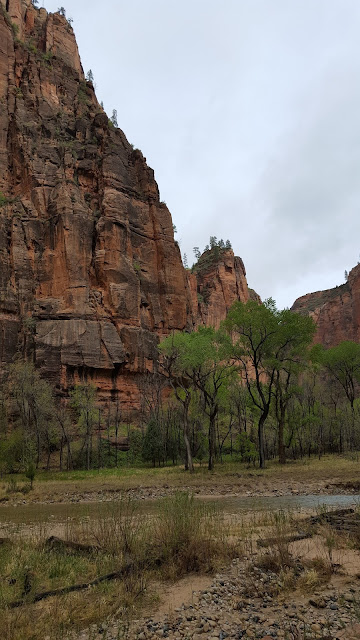 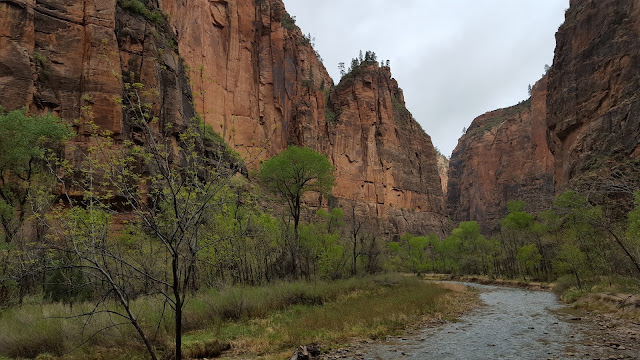 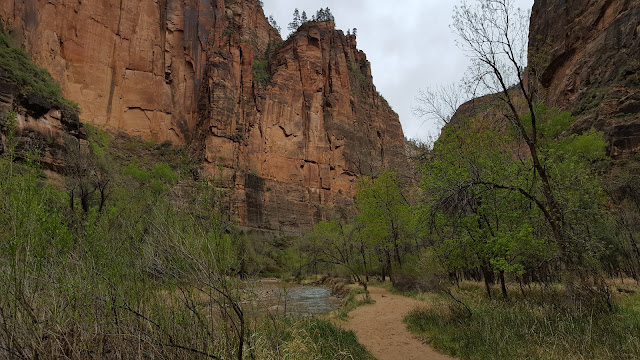 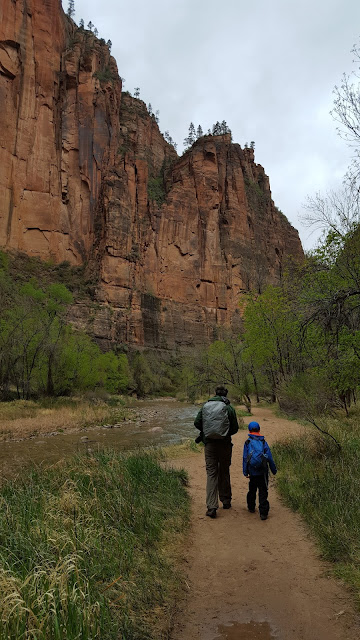 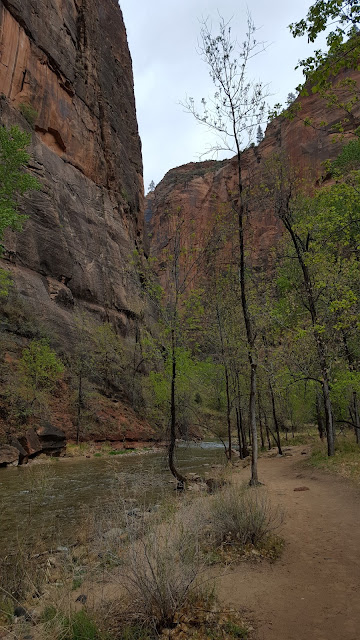 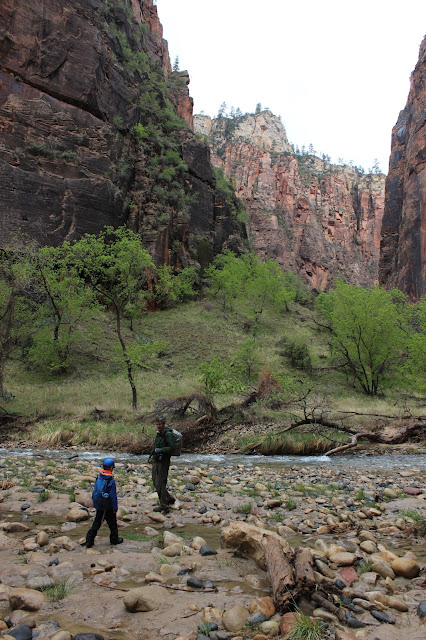 Eventually, at a bend in the river, the main trail we'd been following split into multiple smaller trails, and many were blocked off or signed as restoration areas, so rather than continuing onward by the water, we headed back up to the main trail.  We don't want to contribute to erosion and the formation of herd paths where the Park Service is trying to keep people out.  The main trail was still very very crowded.  State Fair crowded. 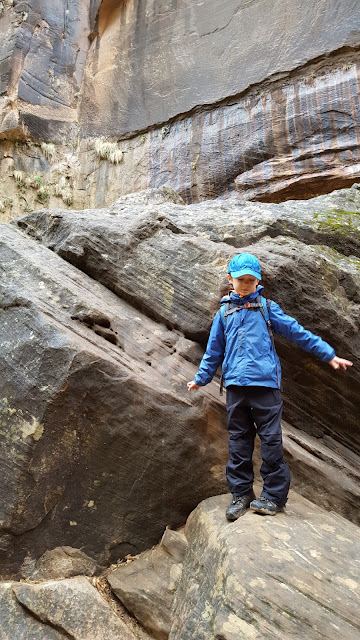 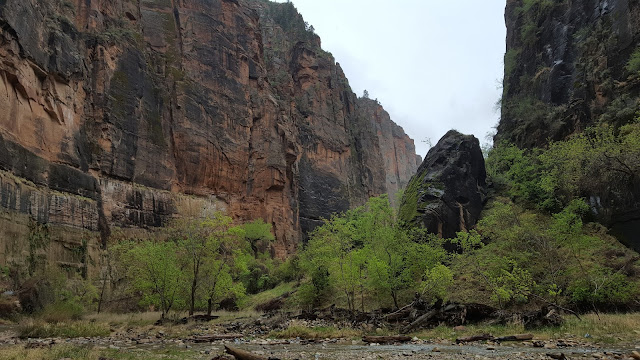 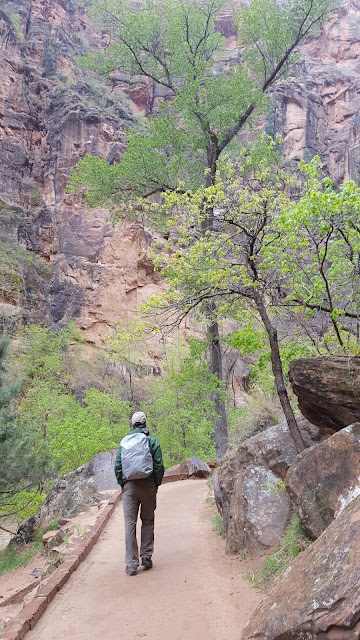 Finally we arrived at the entrance to the Narrows, where we clambered down to the river and jostled among the hordes to get an unobstructed view.  We'll have to come back for this one someday (and Angel's Landing, too). 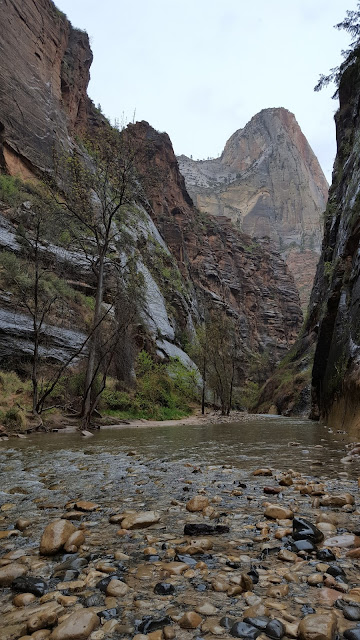 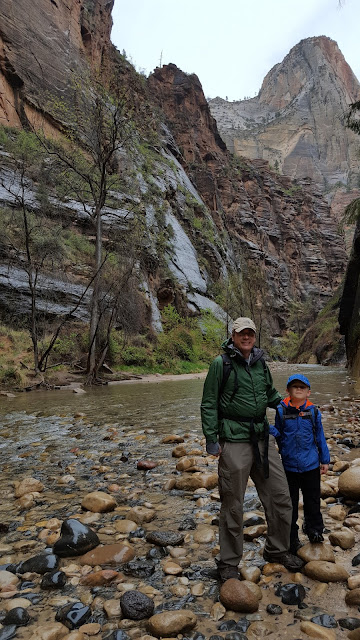 From there we headed back, with slightly different views looking south instead of north.  It felt like I wasn't taking many pictures because of the crowds and the rain, but upon downloading, I found I took more than I thought.  I suspect this might be the busiest trail in all of Zion National Park.  It is a very easy hike, accessible to the very young and very old, and it is truly beautiful. 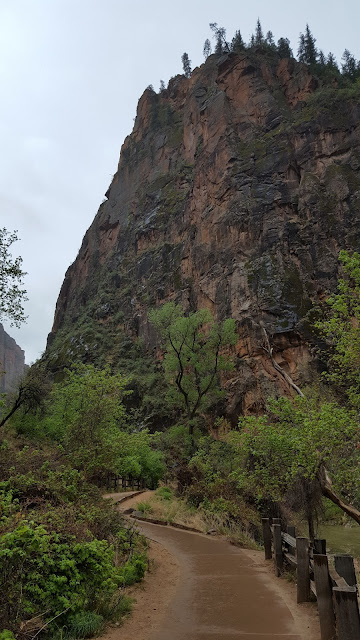 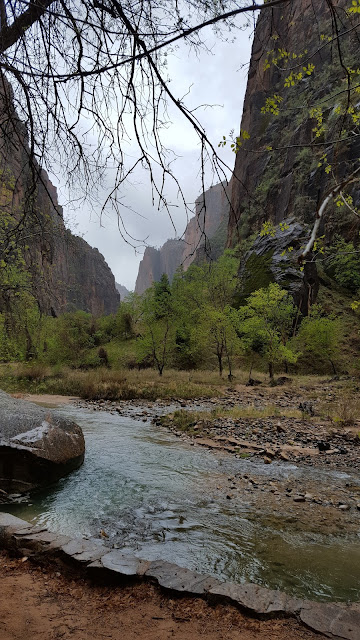 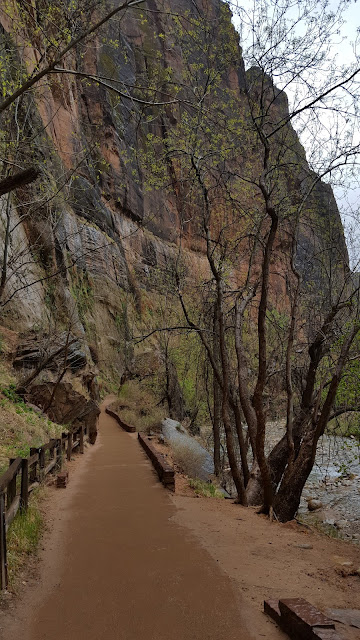 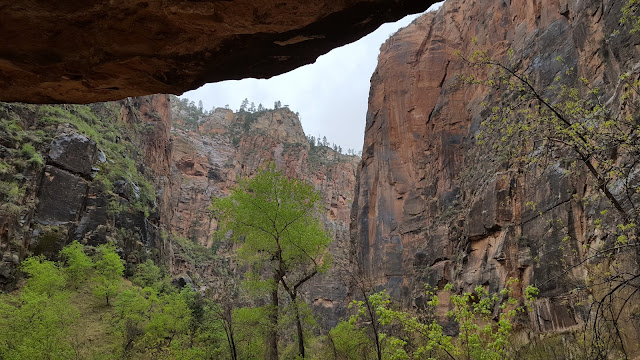 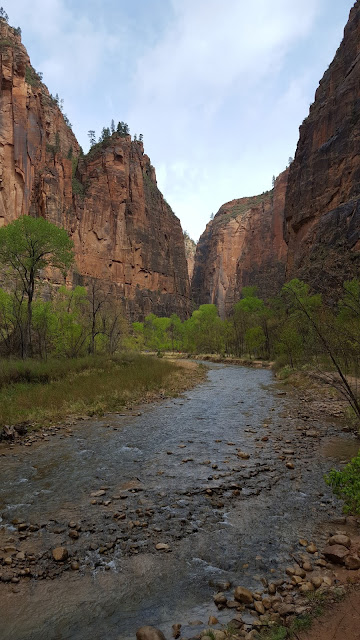 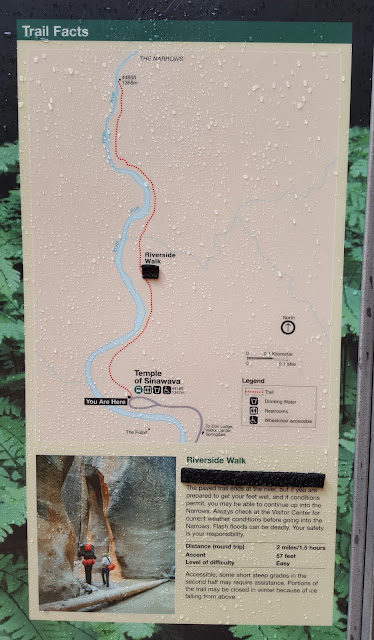 We had been considering eating our packed lunches at the pavilion back at the trailhead, but when we arrived back, it was a total mad house, people swarming everywhere.  Quick change of plans... we hopped the next bus for a short ride to the next stop, Big Bend, where there were no picnic tables, but we could enjoy our sandwiches in relative solitude.  There were even a pair of California condors circling and flexing their wings on the ledge by their nest.  Pretty cool stuff!  No need to settle - plenty more splendor available right around the corner. 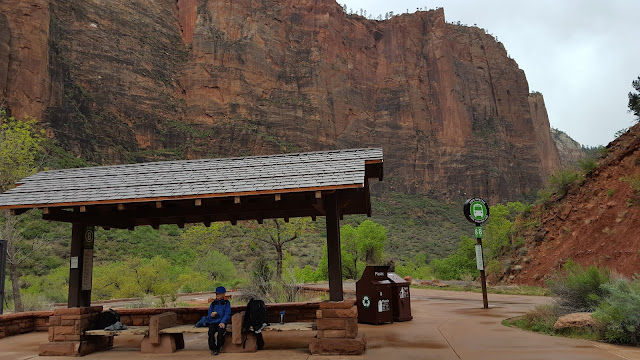 Email ThisBlogThis!Share to TwitterShare to FacebookShare to Pinterest
Labels: National Park, Utah, with a 7-year old